As Schools Struggle With Hate, The Air Force Academy Takes A Stand 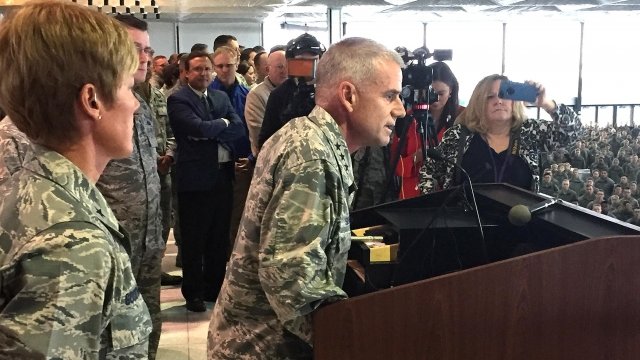 Many schools, parents and advocacy groups have reported seeing an increase in bullying and hate crimes since the 2016 presidential election.

Air Force Academy head Lt. Gen. Jay Silveria found himself having to condemn racial slurs at the school this week, and he did so in front of 4,000 cadets and 1,500 officials.

"You should be outraged not only as an airman, but as a human being. ... If you can't treat someone with dignity and respect, then get out," Silveria said to the school.

The military's strict code of conduct can turn racial slurs into a court-martial. Other institutions around the country also struggle with the issue.

The United Nations issued a warning to the U.S. to condemn racist speech and crimes.

The Southern Poverty Law Center surveyed more than 10,000 people who worked in schools last year, and found 40 percent of them had heard "derogatory language directed at students of color, Muslims, immigrants and people based on gender or sexual orientation."

The SPLC blamed the bullying on the 2016 presidential election. Since a lot of the taunts took a familiar form, the organization called its report "The Trump Effect."

The "Trump Effect" has even branched into parts of Canada, where schools are reporting similar increases in bullying and hate crimes. Some schools have canceled field trips to the U.S. as a result of concerns regarding Trump's rhetoric and policies.

Teachers and administrators are struggling to deal with the issue because it straddles the line of politics — a line schools are wary to cross. But because of the caution, some parents say schools aren't doing enough.

"What we should have is a civil discourse and talk about these issues," Silveria said.