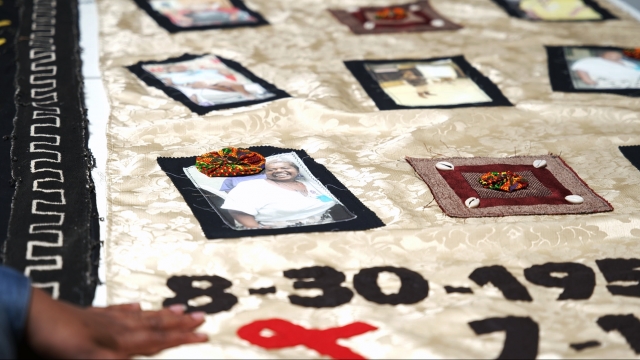 Some fight with anger, others with love. The keepers of the AIDS Memorial Quilt fight with a needle and thread. This year marks the quilt's 35th anniversary.

It's a living tribute to people who've died from HIV/AIDS — a disease that attacks the body's immune system.

Patches the size of a grave.

Gert McMullin has mothered the quilt since its beginning.

She has archives of sewing machines and the arthritis to prove it.

"I don't have kids," she said. "That's what I call the quilt. I've called it my boys from day one. I call it my boys, but I look at them like soldiers."

Every quilt — or panel, as they're called here — has a history, a celebration of someone's life, a rich story. Some date all the way back to the late 1980s. Other new pieces are coming in just today.

Before any stitching, McMullin inspects the panel and gives it an ID number for storage. Six can fit on each shelf.

She also takes in its person, saving everything but the box. People send her personal trinkets, photos and letters.

"The background to all the letters of his name is made from his dentist lab coat, which he wore most every working day," McMullin said. "They'll get documented ... Eventually digitized and archived with the Library of Congress."

Her favorite part is picking which panels to sew into 12 x 12 blocks for display.

"I go for themes and colors," McMullin continued. "But I also try to mix it up."

Gay activists hung about 1,000 panels then over San Francisco City Hall. They were simple, sheet like, spray painted with names.

McMullin says back then 15 fit on a shelf.

The Quilt made its first trip to Washington that year.

"We were laying down our dead in front of the White House to make them do something, you know, to make them care,"

It would be 1996 before a sitting president and vice president would take the time to see the quilt in person.

"You can't deny that that these are people," said Duane Cramer, who lives with HIV. "These are just not statistics," he said.

He walked with then-Vice President Al Gore and the second lady, Tipper Gore.

He showed Newsy the panel he showed them. It's for his best friend.

"My best friend was my father, Joe J. Cramer. And, you know, that was a really tough experience," Cramer said. "We told people initially that he died of cancer. Because we just didn't know what to say, and we were scared of what people would think, and what they would think about us. I made a very intentional decision to put his face on there so that other people that look like me and that look like him could see themselves and go, wow, this is affecting us."

The Quilt's caretakers agree representation on the memorial needs improvement.

Of the 55 miles of quilt, only a half-mile represents Black or African American deaths despite the CDC saying they make up the most HIV/AIDS deaths.

Jada Harris runs a program aimed at connecting communities of color with quilting.

"In the African American tradition, you know, we know not to say 'funerals,' we say 'celebration of life.' We're going to celebrate a life. This is a home going," she said. "It does not have to be a somber environment, but if it needs to be somber for you, we can do that too."

Harris says the AIDS memorial quilt is not just for the people on the panels or for the people making it. It's for those impacted by HIV/AIDS in the future.

"We want these communities, marginalized communities, to know that there is a place for you here," Harris said.

A future, she hopes, includes sewing the last quilt panel.