Ahmed And Other Young Scientists To Stargaze At White House 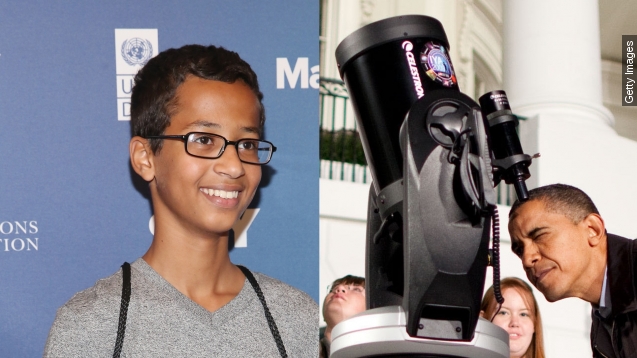 On Oct. 19, the White House lawn will host its second Astronomy Night, where scientists, students and educators will get together to talk space and do some stargazing. (Video via The White House)

And a certain tinkerer from Texas will likely be in attendance. Ahmed Mohamed reportedly plans to attend after he and the clock that got him arrested were invited to the White House last month by President Obama. A White House technology official said, "We think Ahmed will fit right in." (Video via ABC)

There have been many Astronomy Nights during Obama's presidency, though most of them were on the National Mall.

This will be only the second one hosted at the White House. At the first Astronomy Night in 2009, President Obama highlighted the achievements of teen scientists like Lucas Bolyard, who discovered an unusual type of neutron star, and Caroline Moore, who once held the record for being the youngest person to discover a supernova. (Video via National Radio Astronomy Observatory, MSNBC)

This year, more than 100 teens who've caught the space exploration bug have been invited to attend, like Oklahoma high school student Drew Hoke. His school says he recently chatted with a cosmonaut who was aboard the International Space Station. There's also a group of New York high school students who built what looks like their own mini planetarium. (Video via The White House, NASA)

Organizations around the country are invited to host their own Astronomy Night events.

This video includes an image from Bruno Sanchez-Andrade Nuño / CC BY 2.0.