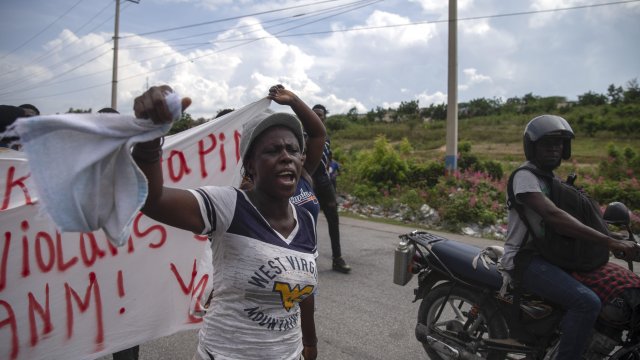 SMS
Agonizing Wait For Families Of Kidnapped Missionaries In Haiti
By Ben Schamisso
By Ben Schamisso
October 21, 2021
Efforts to free the hostages are severely complicated by political instability, with huge parts of the capital under the control of street gangs.
SHOW TRANSCRIPT

It's an agonizing wait for the families and friends of the 17 hostages held since Saturday by the 400 Mawozo street gang somewhere in Haiti.

This French priest was kidnapped by the very same gang back in April.

"At the beginning, they were giving us food once a day, but by the end they stopped feeding us. They forced us to go hungry, believing it was a negotiation tactic," said Father Michel Briand.

He was released after 3 weeks.

"The kidnappers play with time. They test the nerves of their victims, especially when they are negotiating. So, the victims can't lose faith. They need to keep their hopes up. In our case, our faith was our best ally."

The FBI, state department and Haitian authorities are now working quietly to secure the release of the 17 missionaries, 16 of them Americans — all part of the Ohio-based Christian Aid Ministries. They were kidnapped after visiting an orphanage they'd helped to build.

"These are people who went down there with no other motive than to help others. Just think about that and now they have something like this happen. Just horrible," said Ohio Gov. Mike DeWine

The gang is demanding $1 million per hostage. Five of them are children — one just 18 months old. Efforts to free the hostages are severely complicated by events on the ground, with political instability leaving huge parts of the capital and surrounding areas under the control of street gangs.

A human rights worker tells Newsy local authorities have turned a blind eye for too long.

"The situation is really bad and it's the authorities' responsibility to arrest everyone who is involved in the kidnappings," said Joasil Fritznel.

The threat of abduction now so serious that Haiti's gas truck drivers called a strike, refusing to deliver gas to stations today until the government gets a handle on the kidnappings.