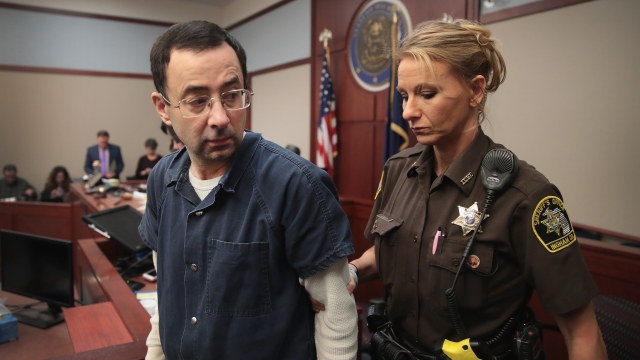 Michigan's attorney general has suspended the investigation into Michigan State University's handling of serial sexual abuser Larry Nassar, according to The Associated Press.

A spokeswoman told The Associated Press investigators want to get more than 6,000 documents from the university, which are listed under attorney-client privilege, but the school's governing board has not concluded whether it will or not. They also want to interview former interim president John Engler. Engler resigned after receiving backlash over comments he made about some victims. He has not been charged.

It's unclear if or when the investigation will continue.

Three former school officials have been charged as a result of the attorney general's investigation. One was convicted and two others, including former president Lou Anna Simon, were ordered to trial. Those cases will still be prosecuted.

Nassar, a former campus sports and USA Gymnastics physician, will spend the rest of his life in prison after he was sentenced to at least 100 years for sexually abusing athletes.