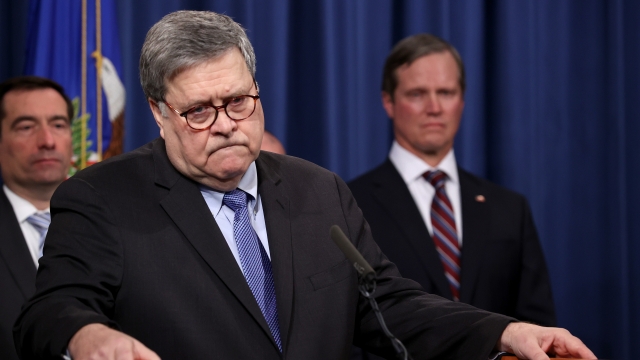 Attorney General William Barr said Monday the deadly shooting at a Naval air base in Pensacola, Florida, last month "was an act of terrorism."

"The evidence shows that the shooter was motivated by jihadist ideology," Barr said. "During the course of the investigation, we learned that the shooter posted a message on Sept. 11 of this year, stating: 'The countdown has begun.' During the Thanksgiving weekend, he then visited the 9/11 Memorial in New York City. He also posted other anti-American, anti-Israeli and jihadi messages on social media, including two hours before his attack."

Barr also dismissed reports that the shooter was "accompanied by other Saudi cadets" prior to the attack, saying "there was no evidence of assistance or pre-knowledge of the attack by other members of the Saudi military, or any other foreign nationals, who were training in the United States."

But he said investigators did discover that 21 Saudi military trainees possessed "derogatory material." Seventeen of them "had social media containing some jihadi or anti-American content," while 15 "had some kind of contact with child pornography." Barr said following an independent review of each case, it was "determined that none of them would, in the normal course, result in federal prosecution."

But, as earlier reports indicated, the 21 cadets were "dis-enrolled from their training curriculum in the U.S. military" and sent home after the Saudi government "found the material demonstrated conduct unbecoming [of] an officer in the Saudi Royal Air Force and Royal Navy."

Barr also called on Apple to help investigators break into two of the shooter's iPhones so they can see "with whom and about what the shooter was communicating before he died." He said "experts at the FBI crime lab were able to fix both damaged phones so they are operational," but that the devices "are engineered to make it virtually impossible to unlock them without the password."