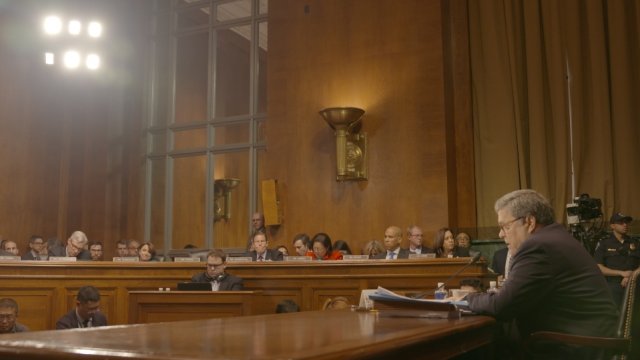 United States senators didn't get much clarity out of Attorney General William Barr Wednesday as they questioned him for the first time since the public release of the Mueller report. Much of the hearing was overshadowed by a letter released earlier in the morning revealing special counsel Robert Mueller criticized Barr for how he characterized a summary of Mueller's findings.

Mueller wrote in part, "The summary letter... did not fully capture the context, nature, and substance of this Office's work and conclusions." Mueller went on to say, "There is now public confusion about critical aspects of the results of our investigation." Barr disputed these claims, calling the letter "snitty," and said he thinks it was written by a staff member, not Mueller himself.

"He was very clear to me that he was not suggesting that we had misrepresented his report," the attorney general said.

Barr says he called Mueller after the letter was delivered and spoke for 10-15 minutes on speakerphone. Deputy Attorney General Rod Rosenstein was among other staffers participating in the conversation. Barr said Mueller told him he was concerned with the media's analysis of the summary and was hoping the department would put out his executive summaries.

"I asked him if he was suggesting that the March 24 letter was inaccurate. And he said no, but that the press reporting had been inaccurate," said Barr.

Mueller's letter, however, made no mention of media reports. Barr declined to put out the special counsel's summaries, saying that he did not want to put out the report piecemeal, though he did issue his own summary.

Democrats are calling Barr's previous comments misleading, and in light of the letter, some are asking him to resign.

But Mueller's letter wasn't the only topic the senators pressed Barr about. Both sides unequivocally agreed the Russians not only tried to interfere in the 2016 election, but could do it again in 2020.

"The Russians did it. It wasn't some 400-pound guy sitting on a bed somewhere. It was the Russians. And they're still doing it," said Senate Judiciary Committee Chairman Lindsey Graham, a Republican.

Barr was scheduled to head to the House Judiciary Committee  Thursday for questioning, but is refusing to do so after being told he'd be questioned by counsel rather than by sitting members.