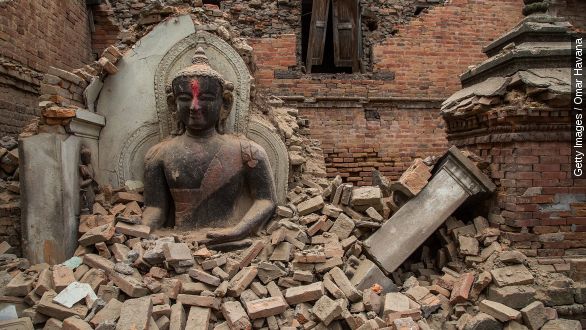 According to the U.S. Geological Survey, the large aftershock occurred about 40 miles east of Kathmandu, Nepal's capital and the largest city in the country.

"I felt it here in Kolkata two and a half hours ago. ... Where I am in Kolkata, that is 900 kilometers away from Nepal. ... If we feel the affects here, you can imagine what the situation is there in Nepal," CNN's Mallika Kapur reports.

The quake's aftershock is hindering relief and rescue efforts throughout the country.

Sunday's aftershock triggered more avalanches in the Everest region, where 19 people have been killed, more have been injured and an unknown number are still missing. This video comes from world traveler Carsten Lillelund Pedersen who has been updating his "Use The World" Facebook page about rescue efforts on the mountain.

Sunday morning, Pedersen posted, "There are still hundreds of people stuck on the mountain in camp 1 and 2, and eventually they will run out of fuel and food. ... You might be able to rescue a few with a helicopter, but not hundreds."

While Indian officials have taken the lead on rescue and relief efforts, Sunday's aftershock complicated travel to and from Nepal. The Kathmandu airport was shutdown briefly and several planes were forced to return to the airports they took off from.

"The sustained operation of that airport in Kathmandu is what is being seen as essential on the Indian side. ... It's quite a logistical challenge on a regular day to get through these borders, let alone when you're trying to get aid through," Al Jazeera's Nidhi Dutt reported.