After US Troops Leave, What Groups Will Still Be Fighting In Syria? 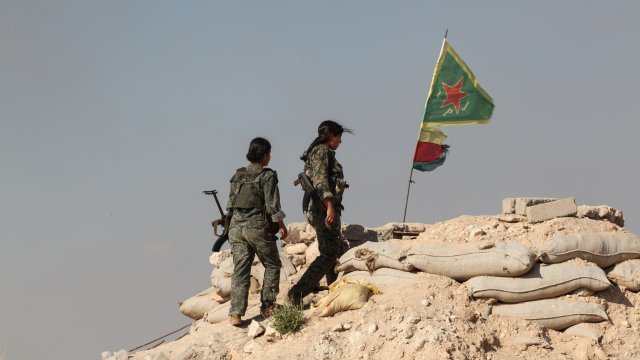 SMS
After US Troops Leave, What Groups Will Still Be Fighting In Syria?

President Donald Trump is sticking to his plan to withdraw all U.S. troops from Syria. So who will that leave behind?

The war started in 2011 as an uprising against Syrian President Bashar al Assad, but there's since been increasing foreign involvement and a lot has changed.

Control across the country is highly fractured, but the big players are the Syrian government, Kurdish forces, and rebel groups.

Assad and his government forces are supported internationally by Russia and Iran. Much of Assad's support within the country comes from smaller, regional groups still loyal to the government.

Kurdish forces control most of eastern Syria, and they're part of the Syrian Democratic Forces. The main military arm for the Kurds is the YPG, and this is the group the United States supported.

Then there are a number of rebel groups, including the Free Syrian Army and the Al-Nusra Front. Some of these rebel groups are backed by Turkey. And once U.S. troops leave, experts say those Turkish-backed groups might increase their attacks on Kurdish forces.

Everyone's common enemy is ISIS. The terrorist group's land control peaked in 2014, and the U.S. Department of Defense says it now controls less than one percent of its previously held territory.

With so many groups battling for territory and control in Syria, the war between factions will continue once the U.S. troops are gone. The Pentagon hasn't released details on what the withdrawal will look like, or when it will happen. It's also unclear if the U.S. will continue to support groups on the ground through other means, like air support or providing military equipment.