After The Blizzard, The Big Chill As East Coast Digs Out 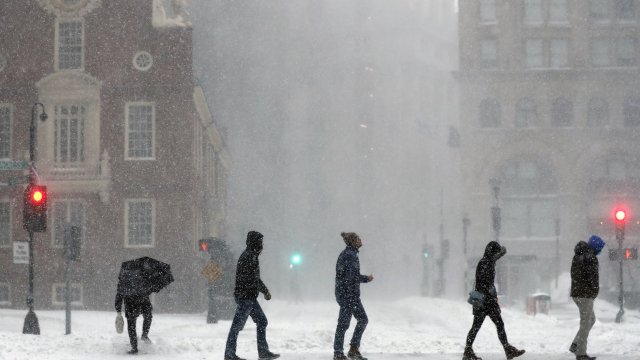 The sun shone down on much of the East Coast on Sunday, a day after a vicious nor'easter brought blizzard conditions to many areas, and left more than 100,000 customers without power for a stretch that could last into Monday.

Winds that had gusted to more than 80 mph on Saturday died down on Sunday, and temperatures climbed into the upper teens and 20s as people emerged from their homes to dig out.

The storm dumped snow from Virginia to Maine, but Massachusetts bore the brunt of the fury, with the neighboring towns of Sharon and Stoughton getting more than 30 inches of snow.

More than 100,000 lost power at the height of the storm, mostly in Massachusetts. That had dropped to about 35,000 by Sunday afternoon, mostly on hard-hit Cape Cod. No other states reported widespread outages.

Utility Eversource said Sunday it had 1,700 crews working to restore electricity in Massachusetts, and customers will have their power back on "by the end of the day Monday, with most before then."

Massachusetts Lt. Gov. Karyn Polito said at a news conference that officials were not aware of any storm-related fatalities in the state.

In and around New York City, snow totals ranged from a few inches north and west of the city to more than 2 feet in Islip on Long Island, according to the National Weather Service. Warren, Rhode Island got more than 2 feet, and Norwich, Connecticut finished with 22 inches. Some areas of Maine and New Hampshire also received more than a foot.

Winds gusted as high as 83 mph on Cape Cod. Coastal towns flooded, with wind and waves battering Weymouth, south of Boston, flooding streets with a slurry of frigid water, according to video posted on social media. Other videos showed a street underwater on Nantucket and waves crashing against the windows of a building in Plymouth.

A Rhode Island couple got married as planned Saturday during the blizzard, according to broadcast reports. Sally Faulkner and Adam Irujo had been planning a wedding for 14 months, so they went through with the nuptials on the steps of the Providence Public Library in front of a few family and friends.

The city tied its record for biggest single-day snowfall on Saturday, with 23.6 inches, the National Weather Service said.

Like most major winter storms in New England, it drew comparisons to the infamous Blizzard of '78, which paralyzed the region for days.

"I was around for the Blizzard of '78, and this one was worse. The wind was tremendous," Joe Brescia, 72, said Sunday, tears streaming down his face from the bitter cold as he shoveled his sidewalk in Warwick, Rhode Island.

Bao Ha, 26, got a shock when he went outside Sunday morning.

"It's funny, it didn't look so bad when I looked out the window this morning," he said as he shoveled the sidewalk in front of his home in Waltham outside Boston, which according to the National Weather Service, got 16 inches of snow. "But it's light, so it's easy to shovel."

Much warmer ocean waters "are certainly playing a role in the strengthening of the storm system and increased moisture available for the storm," said University of Oklahoma meteorology professor Jason Furtado. "But it isn't the only thing."

The storm had two saving graces: Dry snow less capable of snapping trees and tearing down power lines, and its timing on a weekend, when schools were closed and few people were commuting.

However, some school districts announced that classes were canceled Monday to allow for snow removal, including Attleboro and Quincy schools in Massachusetts. Warwick, Rhode Island, schools are going remote on Monday to accommodate snow removal.

The National Weather Service considers a storm a blizzard if it has snowfall or blowing snow, as well as winds of at least 35 mph that reduce visibility to a quarter-mile or less for at least three hours. In many areas, Saturday's storm met those criteria.