What's Next For US-North Korea Relations After Failed Summit? 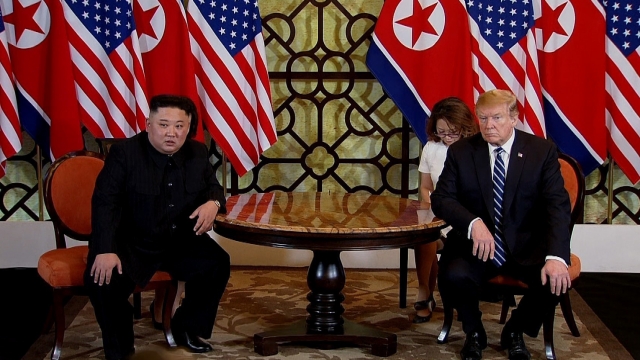 After talks between the U.S. and North Korea in Hanoi broke down, the question now turns to what happens next.

"So it's very difficult to predict, I think they will try to turn back to working level talks between Secretary Pompeo and Special Representative Biegun and their North Korean counterparts," said Lisa Collins, a fellow and the Korea chair at CSIS. "It sounded like the U.S. wanted to continue those talks at the working level."

Lisa Collins, who's a North Korea expert from the Center for Strategic and International Studies, says the two sides will continue to work through roadblocks that came up during the summit in order to find common ground.

"They'll talk about nuclear sites in North Korea, they'll talk about the sanctions piece, how to remove certain types of sanctions laws in both the United States and then to get rid of the United Nations Security Council resolutions," Collins said. "And then also to bring in the talks about peace and the peace declaration at some point as well."

Sanctions are a major problem for North Korean leader Kim Jong-un because he wants to be able to develop the rouge nation that has struggled economically even though he sees his nukes as the best way of ensuring the survival of his nation. Something the U.S. is unwilling to accept.

"The Trump Administration has been stating they want complete irreversible, verifiable, denuclearization," Collins said. "There could be some interim steps along the way in which North Korea's able to give up part of its nuclear weapons program or give access to international inspectors for some of the locations inside North Korea and that would be an exchange for some sanctions lifting."

Both leaders could also seek out the help of China, hoping to leverage for what they want in a lasting agreement.

"Some North Korean officials are going to visit China," Collins added. "We can imagine that Kim Jong-un will probably go back with them, discuss with them a strategy for getting what they want for the negotiations with the United States and they will seek to have Chinese support and backing on that. Of course the U.S. has complicated trade negotiations happening with China at the same time so the U.S. will also be trying to get the opposite from China, getting China to pressure North Korea more."

The leaders ended on good terms and their personal relationship and President Trump's investment in the negotiations is likely a major factor for why there have been two historic meetings. But another summit is unlikely without any concrete progress or agreements behind the scenes.