If Summit Is A Success, Kim Jong-Un Might Get A White House Invitation 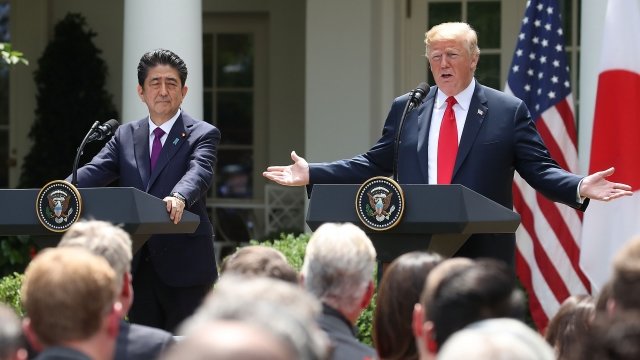 The upcoming summit between the U.S. and North Korea was a key focus of Thursday's meeting between President Donald Trump and Japanese Prime Minister Shinzo Abe.

If the summit goes well, Trump said he would invite North Korean leader Kim Jong-un to the White House.

"Certainly, if it goes well. And I think it would be well-received. I think he would look at it very favorably. So I think that could happen," Trump said.

If the summit doesn't go well, Trump said his administration has a list of over 300 additional sanctions the U.S. could levy against North Korea.

The Trump administration has frequently used the phrase "maximum pressure" when talking about the reclusive nation, but it's softened its tone in light of the upcoming summit, the president says.