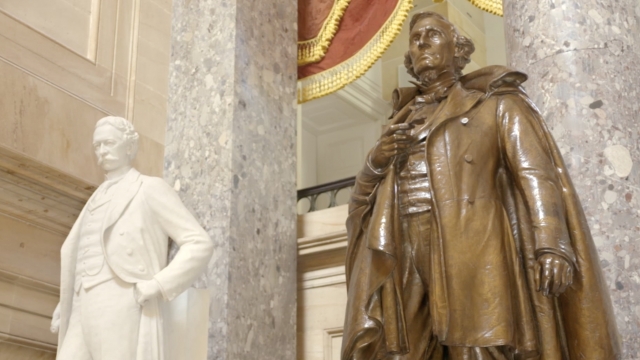 The removal of the Robert E. Lee statue from the U.S. Capitol building Monday leaves 10 other Confederate sculptures on display in the complex, untouched by the reckoning over racially charged symbols that toppled statues in cities across the nation.

The ones in the Capitol are protected by the heavily guarded halls of Congress and by law.

“It’s not like changing a Wikipedia entry, that’s for certain,” said Tim Krepp, author of Capitol Hill Haunts. “It is a bit of a process.”

Each state can exhibit two statues of any local hero they choose, so long as that person is dead.

King Kamehameha of Hawaii is depicted clad in gilded cloak.

“One of my personal favorites that all the tours enjoy is from Florida,” Krepp said. “You have John Gorrie who no one really remembers these days but he is the guy credited with inventing air conditioning, a particularly important thing for the state of Florida.”

Changing out a statue requires a state to take action, as happened in Virginia when the legislature and governor agreed to replace Lee with civil rights pioneer Barbara Rose Johns.

Nine other states still have Confederate statues on display.

Alabama’s Joseph Wheeler leers over lawmakers in his battle uniform.

And while Mississippi approved removing the rebel symbol from its state flag this year, it remains the only state with two Confederate likenesses in the Capitol.

“These painful symbols of bigotry and racism have no place in public spaces, certainly they should not be enshrined in the United States Capitol,” said Rep. Barbara Lee, D-California, after the death of George Floyd.

The House passed a bill to require the statues come down, but the Senate has declined to vote on the plan.

A spokesman for Senate Majority Leader Mitch McConnell pointed us to comments the senator made at a summer news conference when he said statue selection should remain a state decision.

“This nonsense that we need to airbrush the Capitol and scrub out everybody from years ago who had a connection to slavery,” McConnell said. “You know there were eight presidents who had slaves.”

Arkansas has approved swapping out its statue of Milton Rose, a judge who swore loyalty to the Confederacy.

That leaves eight other states that have not announced plans to cast out their own Confederate ghosts from the Capitol.