After Peshawar Massacre, Pakistan Cracks Down On Taliban 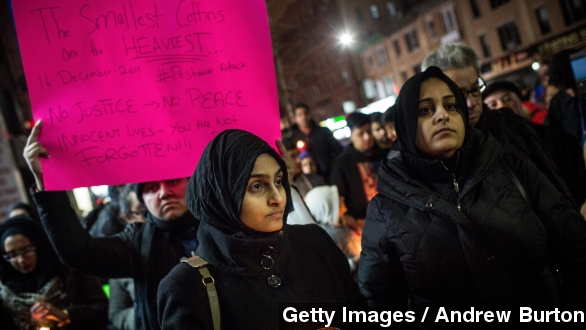 SMS
After Peshawar Massacre, Pakistan Cracks Down On Taliban
By Matt Picht
By Matt Picht
December 19, 2014
Following a deadly Taliban attack on a Pakistani school, the nation has been ramping up its anti-Taliban fight and executing convicted terrorists.
SHOW TRANSCRIPT

Pakistan is still reeling from the horrific Taliban massacre in Peshawar that left 148 people dead this week. And as the nation mourns the tragedy, grief is quickly turning to anger.

Seven Taliban militants entered a Peshawar school Tuesday and murdered 141 people, including 132 children, before being killed in confrontations with police. The Pakistani Taliban claim the attack was retaliation for an increased military campaign against the group.

The backlash has been swift and severe; Pakistani officials report they've killed about 150 suspected militants in strikes and raids since the Peshawar attack Tuesday.

The country also hanged two men accused of terrorism Friday, over protests from the United Nations and human rights groups, after Prime Minister Nawaz Sharif lifted a ban on executions. The Hindustan Times reports 10 more terrorism-related executions might be in the works.

Pakistan is no stranger to terrorism, but many analysts are now wondering if the Peshawar massacre will be a turning point for Pakistan's complex relationship with the Taliban.

There have already been plenty of comparisons to 9/11 by pundits proclaiming this attack will spark a similar shift in Pakistan's anti-terrorism policies.

Pakistan's government has always had a complicated relationship with the Taliban; the country is conducting a military campaign against the group, but it's also been accused of secretly sponsoring the Taliban and other terrorist groups in the past.

But the Peshawar attack has united Pakistan against the Taliban on an unprecedented level.

One civilian told the BBC, "The people want to be free of these animals and whatever they are doing in Pakistan."

And that response might force Pakistan down a less ambiguous path. In the wake of the attack, Sharif has promised the country will no longer distinguish between "good Taliban" and "bad Taliban."

But a writer for The New York Times is skeptical that Pakistan's habit of harboring extremists will be broken by one terror attack — Sharif's party has been linked to Punjabi militant groups, while his opposition is widely viewed as a Taliban sympathizer.

"Pakistan's leaders want to keep at least some militants around to fight India and re-establish some influence in Afghanistan. ... The attitude of the power elites toward terrorist groups is opportunistic. If Pakistan wants to save its children from death and destruction, its leaders will first have to agree that the primary threat to the state is militancy, in any version."