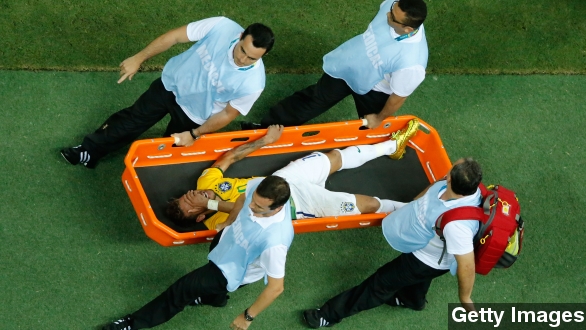 By Ben Lawson
July 6, 2014
Brazil's star player, Neymar, Jr., is out for the rest of the tournament and captain Thiago Silva faces a one game suspension for the semifinal match.
SHOW TRANSCRIPT

Despite securing a spot in the semifinals, it's hard to imagine any member of the Brazilian World Cup team is sleeping easy.

In one week's time, Brazil lost its spokesman for four games over a shoving matching with a Chilean player, and center back and team captain Thiago Silva was suspended for one game after receiving two yellow cards in the match against Colombia. Oh, and did anyone hear that Neymar's out? (Via Getty Images)

Brazil's star player ​Neymar, Jr. will be out the rest of the Cup thanks to a violent tackle from Colombia's Juan Zuniga, which broke a vertabra in his back. (Via ESPN)

Neymar stayed positive in a statement he released while in the hospital. "My dream is not over. It was interrupted by a play but it continues. My teammates will do everything so that I can realize my dream to be champion." (Via Confederation of Brazilian Football)

The New York Times said Neymar was more than just a good player on the team; for many he represented the glory days of Brazilian soccer. "He has been the soul and one consistent threat of a team that has had its shaky moments; the one player whose virtuoso dribbling and flamboyant, all-out style conform to the dearly held but increasingly unrealistic vision of how a Brazilian should look playing his national sport."

SB Nation points out that a lot of people in Brazil are looking for someone to blame for Neymar's absence, and more than a few are pointing fingers at Zuniga, possibly including FIFA. It is still uncertain if he will face official sanctions but a disciplinary committee is analyzing the incident.

But don't let the drama of the last week distract you from what's next. Brazil goes up against Germany, another World Cup favorite, Tuesday in what analysts are saying could be one of the most interesting games of the Cup.

The teams couldn't be more different. Germany is known for its mechanical and calculated brand of soccer, while Brazil is described as creative, free and even flamboyant. (Via USA Today)

Bleacher Report points out that Germany's rigid structure is excellent on set pieces, which is where Silva usually shines for Brazil. So with him out, the team will most likely look to David Luiz to step up, which doesn't sound too bad after his goal off a free kick against Colombia.

However, Neymar leaves a hole that just can't be filled. In this World Cup appearance he has 4 scores, 18 shots on goal, set up 13 chances for teammates, and has 241 touches in opposition. In every category, he is on top for Brazil. (Via The Guardian)

Brazil has been relying heavily on a three man attack consisting of Fred, Hulk and Neymar. The Independent calls Hulk, who has zero goals this tournament, more of a threat than Fred — which isn't saying much since the Independent described him as the worst Brazilian striker to appear in a World Cup ever.

This will be the first time Brazil will hit the field without Neymar in two years. Brazil faces off against Germany in Belo Horizonte July 8.