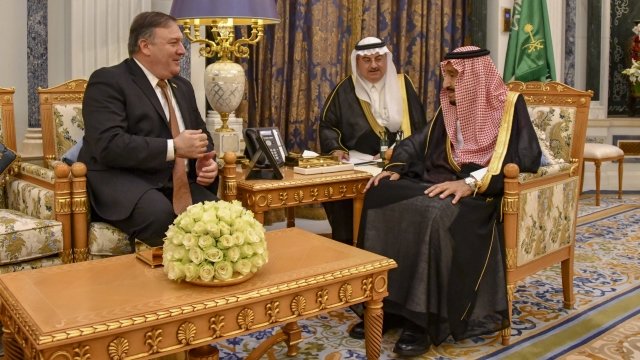 "I don't want to talk about any of the facts; they didn't want to, either," Secretary of State Pompeo said.

Secretary of State Mike Pompeo says Saudi Arabia should be given time to finish its investigation into journalist Jamal Khashoggi's disappearance.

Pompeo met with Saudi officials, including Prince Mohammed bin Salman, on Tuesday before flying to Turkey on Wednesday. Turkish investigators say the Saudi government killed Khashoggi at the Saudi consulate in Istanbul earlier this month.

Pompeo also emphasized the U.S.' economic ties to the country, echoing President Donald Trump's comments on Khashoggi's disappearance. The president has reiterated the Saudis' claims of innocence, although on Wednesday he said he would be interested in a recording Turkish officials claim proves the Saudis murdered Khashoggi, "if it exists."

The Turkish investigation into Khashoggi's disappearance continued on Wednesday as well. Investigators searched the residence of Saudi Arabia's consul in Istanbul, who left the city Tuesday.