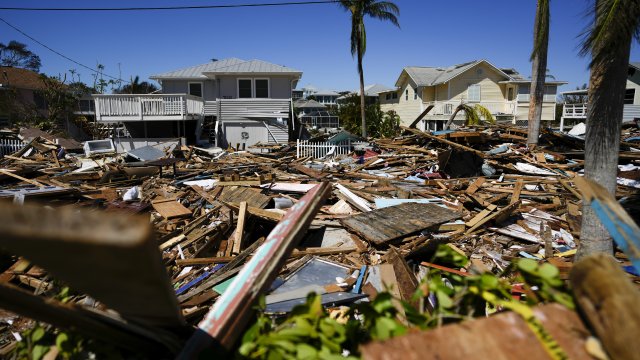 Florida officials have warned people to be wary of fake charity funds spread through social media.

Hurricane Ian has already spurred tens of millions of dollars in charitable donations, but it’s also lured scammers hoping to capitalize on the disaster to make a quick buck.

Florida Chief Financial Officer Jimmy Patronis told donors that they need to be “cautious of imposter GoFundMe-style crowdfunding websites and charity scams” that are popping up during recovery efforts.  Those scams often rely on social media, text messages and emails to circulate fake crowdfunding campaigns.

"One of the reasons that crowdfunding is so incredibly appealing is that it typically centers on one individual or one family," said Laurie Styron, with the watchdog organization CharityWatch. "It gives us that very personal, emotional connection, and it makes us feel like when we give money, it really will make an impact and help the person."

But Styron says who you’re helping may not be who you think it is.

"You don't really know if the person you're donating to could be located 6,000 miles away in a computer from somewhere. There are people at the ready in any disaster to exploit it as a fundraising opportunity to scam," Styron said.

Not all platforms have robust pre-screening procedures to detect possible fraudulent behavior. And scammers can often figure out ways to avoid initial detection, and end campaigns early and make away with funds before they’re shut down.

There are ways to vet these posts. Groups like the Better Business Bureau run webpages that allow users to look up a charity by name to make sure it is legitimate.

Styron also said that individuals can use  search engines to ensure that the visuals or narratives appearing in crowdfunding requests are legitimate.

"If you insist on donating through a crowdfunding campaign - at a minimum - do a reverse image search," Styron said. "Make sure that the images you're seeing or the story that you're hearing hasn't been repeated in multiple places across a lot of platforms. That's usually one sign that it could be a highly sophisticated type of scam."