After Electoral Triumph, What's Next For Myanmar's Democracy Movement? 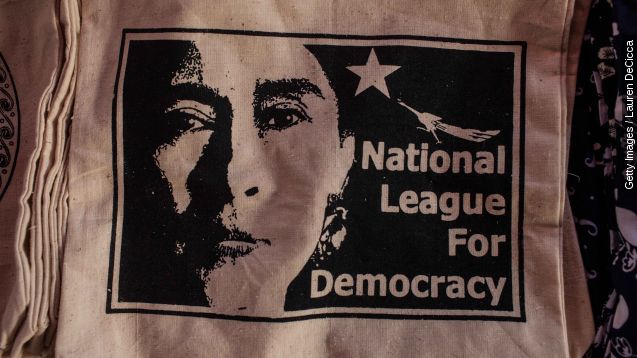 Myanmar just wrapped up its first free and open democratic elections in 25 years, and the results are an unambiguous victory for the National League for Democracy opposition party and its leader Aung San Suu Kyi.

It's being applauded as a landmark moment for a country which has endured 50 years of autocratic military rule. But the NLD's democratic victory comes with a couple important caveats — and quite a few big challenges for the party in the future.

First, Myanmar's constitution sort of undercuts the election results; the military is still in mandatory control of 25 percent of the seats in parliament, along with crucial ministries like home and defense.

And since Suu Kyi's deceased husband was a British citizen, she's constitutionally barred from becoming president. She instead plans to select a president and press for reform: no easy task, since the military has effective veto power over any constitutional changes.

But figuring out how to share power with the military is only one part of the NLD's new struggle; now that it's in power, the party has to deliver on the promise of change that swept it to victory in the first place.

Myanmar is still divided by religious and ethnic tensions. The previous government orchestrated a ceasefire with some of the country's armed ethnic groups, but two of the largest rebel militias did not sign the agreement.

And the NLD has signaled it might not do much to curb the animosity between radical Buddhists and the country's minority Muslim groups. Suu Kyi has continuously refused to speak out on violence against Muslims, and her party barred Muslim candidates from running under their banner.

Still, there is an economic silver lining for the NLD — the party's liberalizing influence on Myanmar's government could buy the country some much-needed foreign investment and international sanction relief.