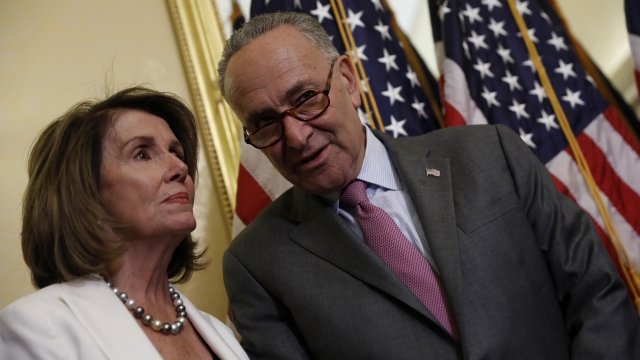 SMS
Democrats Turn To Government Shutdown Talks With Renewed Confidence
By Eugene Daniels
By Eugene Daniels
November 9, 2017
They're balancing pushing a shutdown and pushing for protections for "Dreamers."
SHOW TRANSCRIPT

Democrats are riding high after big election wins in Virginia and New Jersey. And the majority of analysis attribute the victories to some anti-Trump sentiment that brought the left out to vote in droves.

Now, some Democrats want to play ball even harder to negotiate a bill to fund the government next month.

Congress has until Dec. 8 to pass a spending bill. And Democrats know their colleagues on the right need their votes to pass something. So, some Democrats want to hold their support unless there's a deal in the bill to protect "Dreamers" from deportation.

Some even say they're willing to let the government shut down without those protections. But Democratic leaders aren't so sure; sources say they've been clear with the caucus to stay mum on shutdown talk. Threats this early could help solidify conservative support around a more right-leaning bill.

Sen. Tim Kaine from Virginia put it this way: "It has always been the Republicans who shut the government down. We've got to fix DACA, we've got to do a lot of things — but shutting down the government of this country is not a leverage point."

That sounds like a man who remembers the government shutdown of 2013. Sen. Ted Cruz led the effort, trying to force then-President Barack Obama to sign a bill to defund the Affordable Care Act. Republicans ended up on the losing end: One poll at the time found more than 3 in 4 Americans disapproved of how the GOP handled that.

That's not the kind of blowback Democrats want or can really handle right now. On the other hand, the far left of the party likely doesn't want Congress to give the Trump administration or Republicans anything resembling a "win."