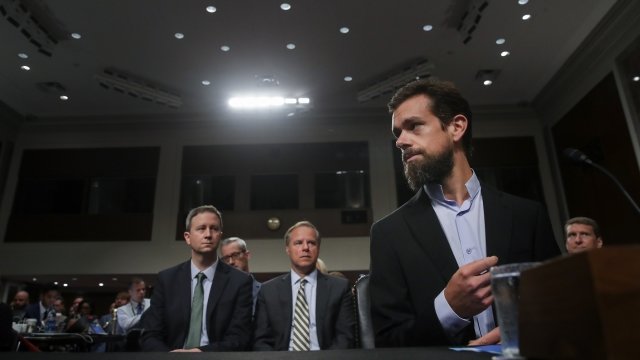 Lawmakers have tough questions for Twitter about its role in Russian election interference, data misuse and hate speech. And now, for the first time, Twitter CEO Jack Dorsey himself was the one to answer them.

The legislative branch's relationship with Dorsey and Twitter hasn't always been the strongest. Congress has invited Dorsey to testify more than once, amid frequent grillings of other big names in social media. But Dorsey has always sent lower-level Twitter executives or general counsel in his place.

Lawmakers said Dorsey's testimony is long overdue — especially considering recent high-profile stories showing just how much power he has over Twitter. For example, he reportedly overruled his staff's decision to ban right-winged commentators Alex Jones and Richard Spencer from the platform.

Lawmakers have complained that Twitter has wrestled for some time with bad actors and misinformation that can influence elections, but hasn't come up with any solutions. Dorsey agreed.

"We're going to do our best to make sure we catch everything, and we inform people when it affects them, but we're not going to catch everything," Dorsey said. "We need to build our technologies to recognize new patterns of behavior and new patterns of attack and understand what they actually mean, and then ideally get some help from our law enforcement partners to understand the intent."

In the House, conservative representatives wanted answers for allegations that Twitter was intentionally silencing conservative voices on its platform. Dorsey said that political bias does not affect how Twitter's algorithm sorts political content. He presented new data which found that Democrats simply seem to tweet more often, and have more active followers.

"We don't consider political viewpoints, perspectives or party affiliation in any of our policies or enforcement decisions," Dorsey said. "We analyzed tweets sent by all members of the House and Senate and found no statistically significant difference between the number of times a tweet by a Democrat was viewed, versus a Republican, even after all of our ranking and filtering of tweets has been applied."