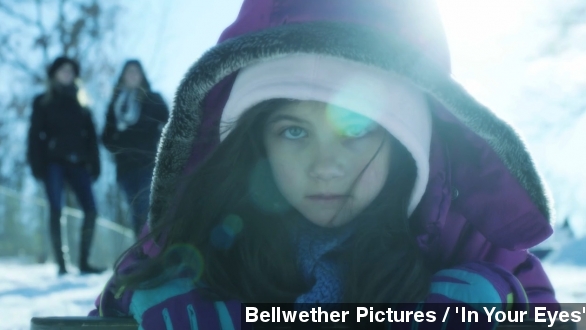 By Erik Shute
April 21, 2014
Director Joss Whedon debuted and released his new film "In Your Eyes" during the Tribeca Film Festival. It's available for streaming now.
SHOW TRANSCRIPT

"​Avengers" director Joss Whedon proves you can premiere and launch a movie worldwide at the same time. Over the weekend, he debuted his new sci-fi movie "In Your Eyes" and announced it would be available for anyone to stream that very same day.

Speaking to an audience at the Tribeca Film Festival, the director said: "It's not just the world premiere of the film. It's the worldwide release date because as of now, 'In Your Eyes' is available on any Internet-capable device at InYourEyesMovie.com for the sturdy price of $5." (Via Vimeo / Bellwether Pictures)

The sci-fi flick written and produced by Whedon follows the interwoven lives of strangers who share telepathic connections. It stars Zoe Kazan and Michael Stahl-David.

Whedon explained at Tribeca he simply wanted to "explore yet another form of distribution" and jokingly added "he gets $5," too.

MTV quipped the director "pulled a Beyonce," referring to the R&B singer who surprised fans with a completely digital album release last December.

Deadline Hollywood thinks the implications of Whedon's release are far more important than flashy surprises. “In Your Eyes"' model of instant gratification could curb piracy or even push distributors to release movies quicker.

"Because theaters and studios can’t figure it out, films are frozen in an arcane system where you wait six months for a DVD and those who don’t want to wait ... have no choice but to steal it. He is onto something here."

"The fact that people like Joss are starting to think about direct distribution and connecting directly with their fans is exciting for us, and a trend we think will continue."

Whedon isn't pioneering the idea of digital distribution, but Variety notes he might be the right face to make the idea mainstream. The director's cult status and career stretching from "Buffy the Vampire Slayer" to "The Avengers" make the strategy more "feasible."

However, The New York Times reminds readers there's one group of moviegoers who might not have found the idea appealing: the hundreds of Tribeca attendees who waited in long lines and paid money to visit the festival only to find out their neighbors could stream the same premiere from their couches.