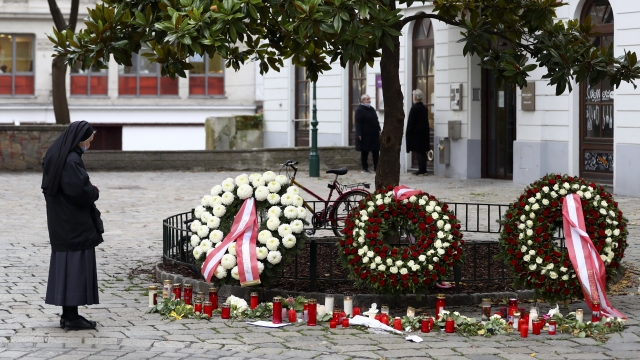 SMS
After Attack, Austria Seeks To Reform Intelligence Sector
By Adam Elrashidi
By Adam Elrashidi
November 5, 2020
Austrian leaders are seeking to reform the country's intelligence sector in the wake of a shooting attack that killed four people on Monday.
SHOW TRANSCRIPT

Kurz told lawmakers on Thursday that Austria does not currently have the tools necessary to monitor and sanction extremists. He said such attacks cannot be allowed to happen again, but did not provide further details about his planned reforms.

On Monday, the 20-year-old gunman — a dual citizen of Austria and North Macedonia — killed four people and injured 20 others in the city center before he was killed by police. Authorities had once convicted the suspected attacker for attempting to join the so-called Islamic State in Syria, but he was given an early release in December.

Austrian authorities reportedly arrested 14 other people with alleged contacts to the suspect. A spokeswoman for  Vienna prosecutors said those detained all have immigrant roots and range in age from 18 to 28 years old.