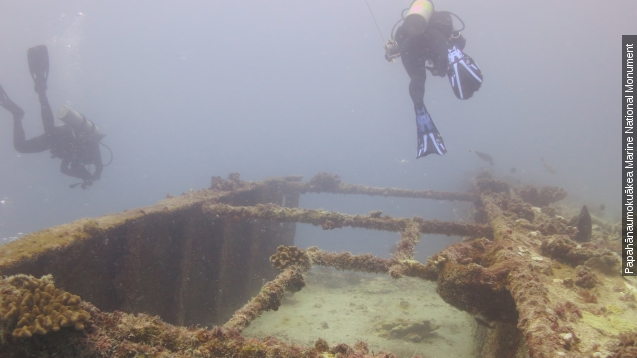 SMS
After 58 Years Of Searching, WWII-Era Tanker Wreck Found
By Kate Grumke
By Kate Grumke
September 5, 2015
NOAA was looking for the U.S. Navy tanker wreckage because it was thought to be a potential pollution threat.
SHOW TRANSCRIPT

After almost 60 years at the bottom of the ocean, researchers have finally found the wreckage of a World War II-era U.S. Navy tanker.

The USNS Mission San Miguel transported fuel in WWII and the Korean War, but it sank in 1957 after hitting the Maro Reef. The entire crew was rescued, but the location of the wreckage was never recorded.

The National Oceanic and Atmospheric Administration was looking for the wreckage because it was identified as a potential pollution threat.

The sunken ship was finally found off the northwest Hawaiian islands. The more than 520-foot ship was sitting in just 80 feet of water.

A UH Manoa marine biology student who was one of the first to see the wreckage told Hawaii News Now, "I had to stare at it for a little bit, but I started freaking out underwater, screaming and motioning."

The wreck will be left where it is to be studied and explored.

This video includes images from the Papahanaumokuakea Marine National Monument.