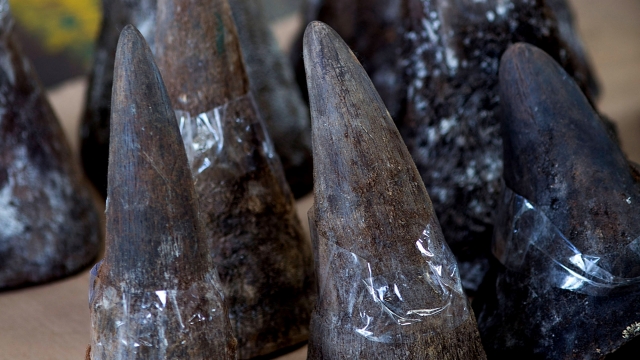 SMS
African Rhino Poaching Increases For The Sixth Year In A Row
By Ryan Biek
By Ryan Biek
March 10, 2016
Over 1,300 rhinos were killed for their horns in 2015.
SHOW TRANSCRIPT

For the sixth year in a row, the poaching of African rhinos is on the rise.

More than 1,300 rhinos throughout Africa were killed for their horns in 2015, according to the International Union for Conservation of Nature.

The greatest demand for the rhinos' horns comes from China and Southeast Asia, where many believe they have medicinal powers.

Yet public campaigns have worked to counter that myth. By October 2014, the percentage of people in Vietnam who bought rhino horns had dropped from 41 to 3 percent.

Rhino horns are also worth little compared to the sale of live rhinos. The IUCN estimates South Africa alone lost $25 million of potential revenue in 2015 due to poaching.

South Africa conserves almost 80 percent of the continent's rhinos but has also suffered the most poaching of any country since 2008. For the first time since that year, though, poaching in South Africa decreased slightly.

The black rhino population, a critically endangered species, is growing by a rate of roughly 3 percent per year. However, poaching is still the main reason their numbers aren't growing by the target rate of 5 percent.

This video includes clips from CNN, World Wildlife Fund and the BBC, and images from Getty Images.