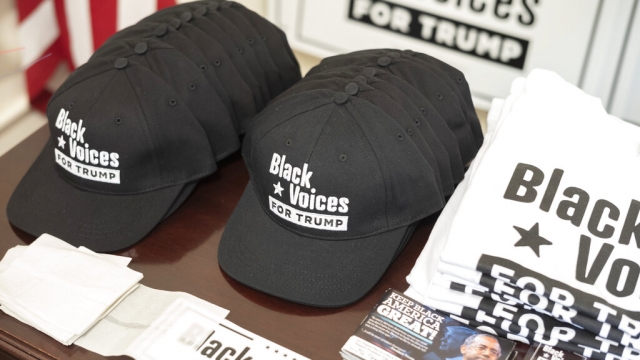 More than 60 African-Americans ran for Congress under the GOP banner last year, a record high.

"That was the loudest I’ve ever heard anything in this room," exclaimed former President Trump.

This was supposed to be the moment African Americans jettisoned the Democratic Party. But did it happen? Did Black people really exit the left? Should Democrats be worried about retaining some African American voters? Depends on who you ask and how you look at it.

Did the so called Blexit happen?

"No. So like, there's a bunch of caveats in this. But the answer is no," replied Dante Chinni, director of the American Communities Project at George Washington University.

Those caveats, gains among Black males and small inroads from 2016.

"We have a set of communities called the African American South, which are largely rural. Trump did marginally better. He did like I think, point four points better than he did in 2016. In those places in terms of margin. So what does that mean? Does that mean he did better with the Black vote? No, because their communities so there are white people who live in those communities too," explained Chinni.

"He received almost 19% of the Black male vote, he received 8% of Black women, which is abysmal, but it's still twice as many as any other. I think twice as many as [Mitt] Romney," said longtime GOP strategist Deana Bass Williams.

However, many pollsters say you shouldn’t read too much into 2020 exit polling numbers either way, because face it, it was a really weird year.

Let’s look at it another way. More than 60 African-Americans ran for Congress under the GOP banner last year, a record high, according to the RNC. But when it comes to victories, the number of Black Republicans entering Congress in 2021 is unchanged from 2017.

“I fought a good race, I will say. I had the best team imaginable,” said Vivian Childs.

According to the Center for American Women and Politics, she wasn’t alone, 33 Black or mixed-race Republican women ran for congress in 2020. None of them won. Childs says changing that starts with greater support from the party.

"Just because you look like me, doesn't mean I'm gonna vote for you. I want the best candidate. But when you have that candidate, then support them. That's what I'm saying. Don't tell me you want to see diversity and you don't do anything about it," said Childs.

Only one black GOP woman has ever won in Congress: Mia Love, who lost her reelection after a bout with then-President Trump.

"Mia Love gave me no love and she lost," remarked Trump.

The former president seemed to be a fixture in Black GOP momentum, with Black conservatives capturing the spotlight and deflectors castigated. But where does the Black GOP movement go from here, with Trump gone, no net gains in Congress, and a party fractured by the Capitol riots?

A letter obtained by Newsy in the wake of the events of the Capitol and endorsed by prominent Black Republicans calls on the party to "examine itself after losing the White House and Congress."

"His kind of in-your-face attitude attracted a lot of people, both Black and White to the party. And that's a good thing. I think where we stand right now is that his rhetoric and what's happened over the last, you know, days in the Capitol will also be a reckoning,” said Bass Williams.