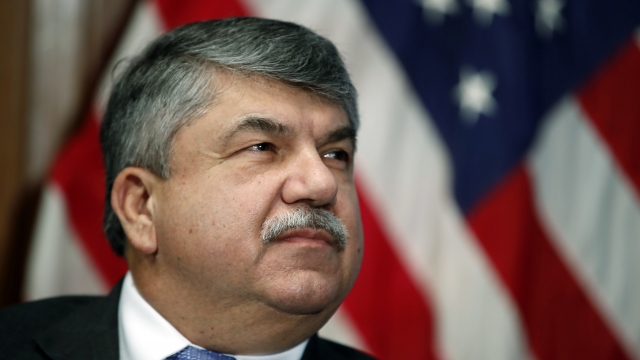 SMS
AFL-CIO Union President Richard Trumka Dies At 72
By Associated Press
By Associated Press
August 5, 2021
Trumka emerged from the coal mines of Pennsylvania to preside over one of the world's largest labor organizations with more than 12.5 million members.

Richard Trumka, the powerful president of the AFL-CIO who rose from the coal mines of Pennsylvania to preside over one of the largest labor organizations in the world, died Thursday. He was 72.

The federation confirmed Trumka’s death in a statement. He had been AFL-CIO president since 2009, after serving as the organization's secretary-treasurer for 14 years. From his perch, he oversaw a federation with more than 12.5 million members and ushered in a more aggressive style of leadership.

"The labor movement, the AFL-CIO and the nation lost a legend today," the AFL-CIO said. "Rich Trumka devoted his life to working people, from his early days as president of the United Mine Workers of America to his unparalleled leadership as the voice of America’s labor movement."

A burly man with thick eyebrows and a bushy mustache, Trumka was the son and grandson of coal miners. He grew up in the small southeast Pennsylvania town of Nemacolin, where he worked as a coal miner while attending Penn State University.

He was elected in 1982 at age 33 as the youngest president of the United Mine Workers of America, pledging that the then-troubled union "shall rise again."

There, he led a successful strike against the Pittston Coal Company, which tried to avoid paying into an industrywide health and pension fund, the union’s website said.

As AFL-CIO president, he vowed to revive unions' sagging membership rolls and pledged to make the labor movement appeal to a new generation of workers who perceive unions as "only a grainy, faded picture from another time."

Further details of Trumka's death, including the cause and where he died, were not immediately available.