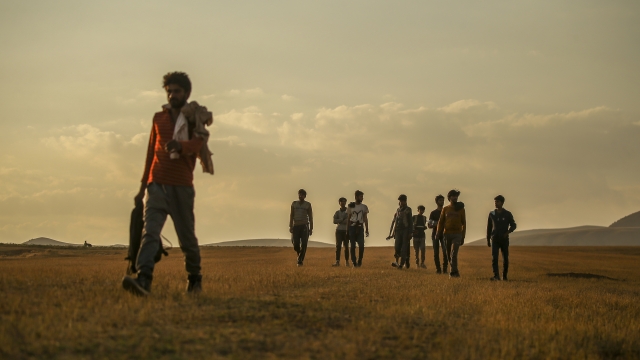 SMS
Afghanistan's Neighbors Brace For Aftermath Of Taliban Takeover
By Meg Hilling
By Meg Hilling
August 18, 2021
Countries neighboring Afghanistan prepare for an influx of refugees and brace for security concerns that could arise.
SHOW TRANSCRIPT

As the Taliban secure control of Afghanistan, neighboring countries are bracing for what comes next.

Scenes like this are becoming increasingly common throughout the region. Afghan refugees crossing borders by foot into countries as far off as Turkey to escape the Taliban, about 1,500 miles away. Feroz Seddiqi left about two months ago, traveling through Iran "out of necessity." He says he is hopeful the Turkish government will accept him.

Turkey says it has welcomed positive messages it has seen from the Taliban so far and  it remains committed to supporting economic development and stability inside Afghanistan. Stability that could stem the flow of refugees into the country.

Some refugees have made their way to the border of neighboring Uzbekistan, only to be turned away because they didn't have visas. This man says he had a visa and was able to cross but was forced to leave behind his children and relatives.

One of the busiest borders in Afghanistan right now? Pakistan's, where hundreds of Afghans have reportedly crossed over in recent days.

Pakistan's Interior Minister says his country has allowed more than 900 people flying in from Afghanistan to land since Sunday. He says Pakistan's "borders are safe" and that all of its airports are welcoming "foreign diplomats, foreign people and media people."

Meanwhile, countries like Tajikistan and Uzbekistan are teaming up with Russia, conducting joint military drills in preparation for any security threats that may arise from Afghanistan.

China, which shares a roughly 50-mile border with Afghanistan, says the Taliban takeover reflects "the Afghan people's will and choice." It's also using the situation to criticize the U.S. for what it called America's interference in the affairs of other countries.