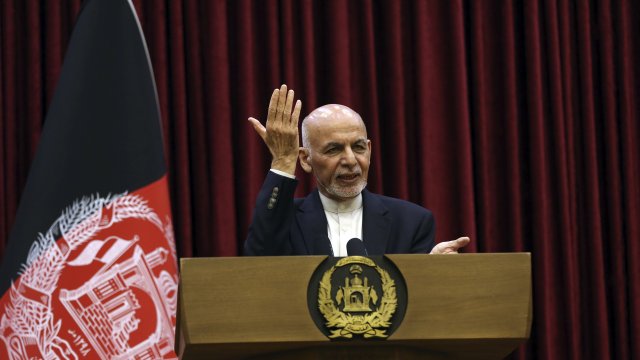 SMS
Afghanistan President Refuses To Free Thousands of Taliban Prisoners
By Bailey Vogt
By Bailey Vogt
March 1, 2020
Afghanistan's president says it's not U.S.' place to promise the releases, included in a timeline signed by the U.S. and the Taliban Saturday.
SHOW TRANSCRIPT

Afghanistan's president said Sunday he would not release Taliban prisoners prior to peace talks — complicating the ending of the longest war in American history.

The U.S. had promised the release in a peace treaty timeline signed by the U.S. and the Taliban on Saturday. But Afghan President Ashraf Ghani said that the promise was not one for the U.S. to make.

Ghani said he's open to negotiating the release of about 5,000 Taliban prisoners but it can't be a "precondition" to peace discussions.

The development is unlikely to affect the planned withdrawal of U.S. troops from the region over the next 14 months. U.S. officials said the exit is based on the Taliban's commitment to preventing terrorism and not on relations between factions inside Afghanistan, according to The Associated Press.

The talks between the Afghanistan government and Taliban are scheduled to begin March 10th in Oslo, Norway.