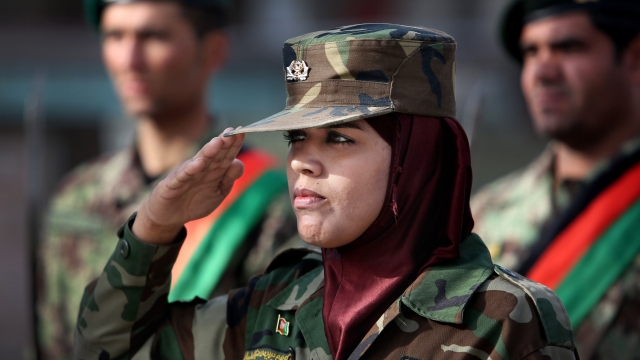 SMS
Afghan Women Trained For Combat In Secret By U.S. Army
By Sasha Ingber
By Sasha Ingber
August 10, 2021
Now there are concerns for the women's safety, as the Taliban seizes more territory and the U.S. leaves Afghanistan.
SHOW TRANSCRIPT

Years ago, a small group of women in the Afghan National Army secretly received combat training from women in the U.S. Army. Even today, few people know about it.

"Well, a lot of it's classified," said Maj. Christie Lamond.

Maj. Lamond was part of “Cultural Support Teams” — a benign name for elite women who served in combat operations alongside Green Berets and Army Rangers. They also taught Afghan women in secret programs everything from basic rifle marksmanship to close-quarter combat.

"The kind of combat training that they received is very similar to what we receive here in the United States,"said Lamond.

"There's a lot of parallels between us and them," said Lamond. "A lot of their families don't know that they were going to be serving in this capacity ... Our families didn't even know what we were doing."

Women in the Afghan Armed Forces risked getting beaten, burned, raped, or killed. Still, they would fill out an application, get interviewed, and be selected based on their skills.

The training could last nine weeks to seven months. But now, U.S. troops are nearly gone and the Taliban is resurging.

"They're going to be particularly vulnerable in this situation where the Taliban might target Afghan women military officers, and some of their neighbors and fellow soldiers might not agree with the work that they're doing as military officers," said  Annie Kleiman.

Kleiman, who was also a Cultural Support Team member, says something else makes them vulnerable: They're mostly minorities in Afghanistan — Tajiks, Uzbeks, and Hazaras – a historically persecuted ethnic group that support girls in education. "I understand the argument that fleeing is a concern, that they could be perceived as abandoning their country. I can't fault any of them for trying to get out of the country in a situation like this," said Kleiman.

Today she’s trying to help these Afghan soldiers come to the United States through Special Immigrant Visas. But it’s unclear if that will work.

Newsy sent a request to the State Department for clarification on visa and refugee programs available to the women. A spokesperson told us it “will continue to support Afghan women” but didn’t address this lingering question: Are they eligible to seek refuge in the United States?

Meanwhile, their own government is urging them to stay.

"They have to be prepared to serve as their male officers, because we see the situation is getting worse and it's not a better option to escape," said Capt. Mursal Afschar.

That’s Mursal Afschar, who carries out policy and strategy in the Afghan National Security Council. She tells Newsy more than 5,000 female officers are serving. Some even trained outside Afghanistan in the US, UK, and other NATO countries.

"They are forced. They have no other option left but to fight in this meantime," said Afschar.

Initially we tried to reach the women. But the Afghan Ministry of Defense told us they don’t have permission to do interviews which isn’t necessarily true for men. Ultimately, concerns for the women's safety stopped us from speaking directly with them. But we did reach Latifa Nabizada, Afghanistan's first female helicopter pilot, who's resettled in Austria. She says she fled Afghanistan in 2015, after the Taliban ransacked her home and stole her weapons. Later, they tried to kill her in a car bombing. Today, she’s raising her daughter Malalai to be a pilot and talking to women in the military through Facebook and phone calls. She says the women fighting against the Taliban tell her they’re scared and uncertain of what comes next. But that they’re brave, and they’ll keep on fighting.