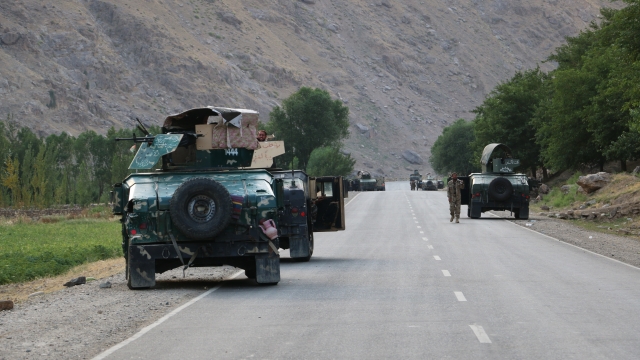 Afghan soldiers, filmed by the Taliban, as they surrender in the north -- around the country’s power center. The Taliban saying this video is from just weeks ago. And the takeover has only intensified.

Before May, they controlled just 73 districts. Now the Taliban controls about 200 -- roughly a third of the country --according to the Long War Project, which chronicles the region. With more than a hundred other districts contested, the government controls only about 20 percent of Afghanistan.

And now, Newsy has learned… a country-wide counteroffensive, with ground operations and air strikes, is coming “soon.” That’s according to an Afghan Ministry of Defense official.

"Right now, only about 20,000 commandant forces are in front lines, they are fighting face-to-face with Taliban. When we launch offensive operations, the number of fighters who will be engaged in this operation will be increased maybe 40,000 or 80,000. It depends on our necessity," says Fawad Aman, the spokesperson from the Afghan Ministry of Defense.

But what impact that will have -- and whether a surge is even possible -- remains unclear.

A thousand Afghan troops fled this week -- into Tajikistan. The Taliban capturing virtually all of the districts in that northern border province... three of them, reportedly, handed over without any combat.

Meanwhile Taliban fighters have been flaunting their victories to foreign journalists, leading a delegation from British broadcaster Sky through what’s supposed to be an Afghan military base. A member of their police force -- making threats.

The Taliban’s offensive began in mid-April as President Biden announced the withdrawal of U.S. troops.

The last American troops abruptly left Bagram Airfield last week… pulling out in the dark of night, without notifying the base’s new Afghan commander. U.S. troops even shutting off the electricity, leaving their counterparts literally -- and figuratively -- in the dark.

“And finally by seven o'clock in the morning, we understood that it was confirmed that they had already left Bagram," said General Mir Asadullah Kohistanim, Officer in Charge of Bagram Airfield.

He admits two hours passed before he learned the Americans were gone.

And now, thousands of citizens are trying to flee… to Turkey, Iran, and Europe... even as the Taliban hope to convince them: they have nothing to fear.

A key question: how different are the Taliban today from the way they were 20 years ago? The Afghan Ministry of Defense says they’re still ruthless, oppressive, and violent. Linked to a recent spate of targeted assassinations -- of journalists, of judges, and of powerful women. And last month, a U.S. intelligence assessment warned the Afghan government could fall within six months of American withdrawal. We might be watching that happen today.