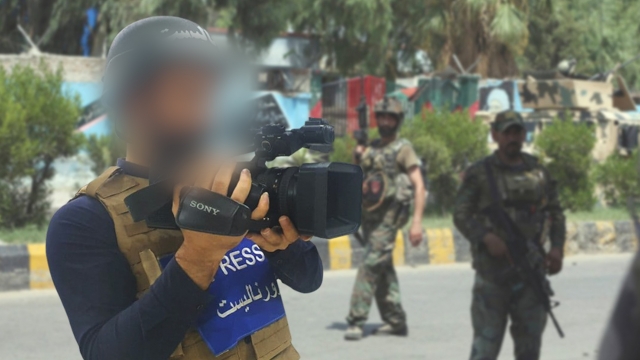 SMS
Afghan Reporters Fear Being Killed By The Taliban
By Ben Schamisso
By Ben Schamisso
September 7, 2021
Two reporters Newsy spoke with do not believe for a second the Taliban's promise of amnesty for them and other American allies.
SHOW TRANSCRIPT

"My neighbors told the Taliban group that he has gone to outside of the country. But if they hear my sound, they know that I'm here," Afghan TV reporter Ali said. "I have not gone home for two weeks and I have not seen my wife and my children."

They dedicated their careers to fighting for democracy and calling out the Taliban. Now they say they are on the Islamist group's "blacklist."

We're blurring their faces, distorting their voices, and calling them Ali and A.J. to keep them safe.

As the Taliban approached Kabul, they phoned Ali and A.J. multiple times demanding they stop their negative coverage of the group. If not, they and their children would soon be killed.

"They came to our homes and they destroyed everything they found," A.J. said.

Ali and A.J. fled as soon as Taliban fighters entered Kabul. Hours later, the Taliban ransacked their houses. These photos taken by neighbors, themselves pressured to reveal the journalists’ hiding place.

Ali and A.J. say a fellow journalist was recently murdered by the Taliban.

The group also detained several reporters covering a demonstration in Kabul on Tuesday.

"No media, no television, no radio and no newspaper...cannot make any report against them," A.J. said.

Ali and A.J don't believe for a second the Taliban's promise of amnesty for them and other American allies.

Many Afghan journalists working for international news organizations have managed to get out of Afghanistan. Like others working for local news operations, Ali and A.J. still hope to escape, though the Taliban now control all exit routes.

"We are growing our beard. We are changing our face," A.J. said.

They are working with American attorneys to obtain humanitarian paroles — a status that allows foreigners to enter the U.S. under extraordinary circumstances.

Immigration attorney Sandra Feist said, "Something that is just really striking to me is just how relatable my clients are and how much in common we have."

Feist is working pro bono on the reporters' case. She's been deeply impressed by their journalistic passion and integrity.

"These are people who are inspired, who followed the American lead in Afghanistan and said, 'We will meet you in this mission to create a government, create a democracy where we have religious freedom, where we have women's rights,'" Feist said. "You know, these people are awesome… And they have so much to offer the world wherever they may end up."

For now, Ali and A.J. want the world to know what's really happening in their country.

"You are our voice," A.J. said. "We want you to show this dangerous situation in Afghanistan to all the countries."