Afghan Refugees: A Community On Edge 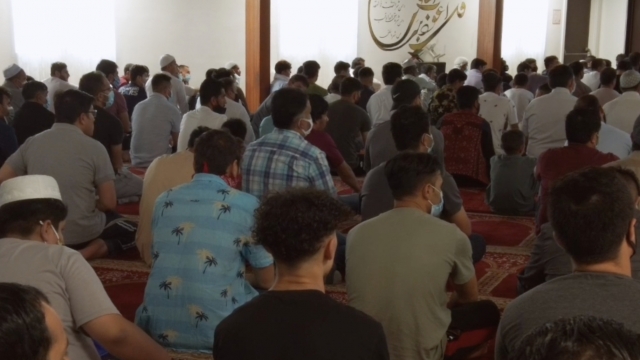 SMS
Afghan Refugees: A Community On Edge
By Jason Bellini
By Jason Bellini
August 16, 2021
Afghan refugees are watching things unfold in their homeland as they anxiously wait for word from their relatives.
SHOW TRANSCRIPT

More than 7,000 miles away from their homeland, Afghans are called to prayer at a Mosque in Sacramento, California. The call is answered by hundreds of people.

Rahman says this three-year-old mosque is a refuge for Afghans trying to navigate a new life a world away from their homeland – a transition made much harder in the past few days as the Taliban rapidly regains control. They are left worrying about what’s happening to the parents, siblings and other loved ones they left behind.

"It's like a support group. You know? When people have problems back home they are traumatized because they get the news that somebody got killed, that someone died. We pray for them."

Bellini asked: "Many of the people here, they helped the Americans? Is that how they're here?"

Most everyone is here thanks to the special visa program that allows Afghans who served the U.S.-led military coalition in Afghanistan to come to America and bring immediate family members with them.

The men I talk to — and it’s only men, because the women, according to religious custom, pray separately — speak of the realities shared by nearly everyone at this Mosque.

Former interpreter for U.S. Special Forces in Afghanistan Mumtaz Mushtaq said: "I think that if I stayed there I would be beheaded or tortured."

Bellini asked, "You're saying you think you'd be beheaded if you were there right now?"

Mushtaq responded: "Absolutely. Because that's what those people do."

Those people that Mumtaz Mushtaq is referring to are the Taliban. He says he spent ten years on the front lines with the Americans fighting them — as a translator, and more.

Bellini asked, "So you worked with U.S. Special Forces?"

Mushtaq responded, "I was the main person for them in every operation."

Bellini asked: "Did you carry a weapon?"

Mushtaq responded: "I did."

Bellini asked: "Did you ever have to fire it?"

Mushtaq responded: "Every single mission. We had to."

Bellini asked: "Are you mad at the Americans for leaving?"

Mushtaq responded: "I am. I am. Because this was not the best time to leave that country."

Mushtaq arrived in the U.S. ten months ago. When I reached him on Monday, he said that he contacted his friends in the U.S. Special Forces to say that, if they go back to Afghanistan, he wants to go back with them.

Bellini asked: "Are you married?"

Mushtaq responded: "I am. My wife and three kids."

Bellini asked: "Are they happy here?"

Mushtaq responded: "They are getting there ... I try to motivate them. We are going to be here for a long time. Probably forever."

The special visa program didn't allow him to bring his parents and siblings, who've fled to the capital, Kabul.

Bellini asked: "Were they in greater danger because of you and what you did?"

Mushtaq responded: "It was probably 50 percent because of me, so like half of my family they were working in the Afghan government."

Mushtaq's friend, Mohammad Anwar Insha, says he has brothers who worked for the Afghan government. The night before I talked to Mohammad, he got troubling news from his family back in Afghanistan.

"Last night, unfortunately, the Taliban took control of my home province, Tabul," he said. "It's very sad for me because my family and all the families that worked for the government had to leave the city."

"I lost one of my brothers. They killed him. He was a police officer. He lost his life," Insha said

Insha responded: "It was a couple months ago. Last night they came to the city and my other brother had to leave the city and he had to go to Kabul."

On Monday, Insha said that brother, who used to work for the Afghan government, went to Kabul's airport, where he was among the thousands of desperate people trying to get out of the country. He hasn't gotten a flight and is in hiding, as are his six other siblings. He says they're terrified and feel they can trust no one right now. Insha, who's 31, spent seven years as an interpreter for American troops. His wife and children arrived in the U.S. two years ago.

Bellini asked: "What is it like for you being here in Northern California with all that is happening right now in Afghanistan?"

Insha responded: "Everyone they are sad about that. My country is bleeding, and I can't do anything. It's hurting me. It's hurting everybody."

I asked several of the men I met at the mosque whether I could come over to their homes and meet their families. Speak with their wives. And I was told their wives probably wouldn't be comfortable with that, but I could come to a park and meet more people in the community there.

Isha and Mohammad show me that the park is a gathering place.

Bellini asked: "How long have you been over here?"

Mushtaq said: "Every single person you see here, they left someone in Afghanistan."

Bellini asked: "Right now we are out here in the park on a Friday night. And everything seems quite pleasant. Children are playing soccer. Very far removed from what's going on back there. Is this a community on the edge right now?"

Mushtaq responded: "Right now I'm talking to you about something else, but it's still going on in my mind what's happening there."

Parents worry. Their children perhaps not fully comprehending how different their lives might otherwise have been.

Insha said, "They are our hope."