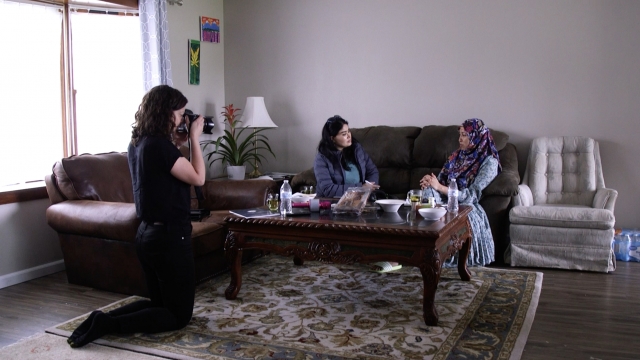 SMS
Afghan Refugee, Journalist Highlights Other Refugees Now In The U.S.
By Ben Schamisso
By Ben Schamisso
May 16, 2022
An Afghan journalist fled for her life when the Taliban invaded, and now she's continuing her work by reporting on refugees in the U.S.

Thousands of miles away from home, Afghan refugee Saleha Soadat appreciates the perks of her adoptive country.

SALEHA SOADAT: I think in the U.S., the land is very big. Because Afghanistan is a Muslim country, it is not allowed to be without the scarf and clothing like this.

NEWSY'S BEN SCHAMISSO: So this is new for you to be walking in the streets in these types of clothes?

SOADAT: Yeah, exactly. It is new for me. But I love this because I'm comfortable. I don't like the scarf.

SCHAMISSO: It's all about comfort here.

SOADAT: Especially for journalists, because journalists are very busy.

For over a decade, Soadat was a famous television and radio journalist in Kabul.

Often the only woman in the room, she kept politicians in check and exposed violence and discrimination against women. As a result, she says she got daily threats from the Taliban and others, but she never gave up.

"I did my job and I survived," Soadat said.

SCHAMISSO: What made you especially vulnerable to the Taliban?

SOADAT: I am a journalist, I belong to the Hazara ethnic group and I am a woman.

Running for her life, Soadat managed to get on a U.S. evacuation plane, but the harrowing experience left her scarred.

"When I was in the military airplane with no destination, I didn’t know what was next," Soadat said. "It was very sad. When I remember, I just cry. I left everything: my family, my home."

After spending multiple days on U.S. bases overseas, she made it to Fort McCoy in Wisconsin in late August. Two months later, she started a new life in the Chicago area.

Ever since she set foot in the U.S., Soadat has been using every waking hour to get back on her feet.

The next step was finding a job. After searching day and night for opportunities, Soadat caught her break in March. Chicago-based online magazine Borderless hired her as a spring fellow to report on other Afghan refugees.

“It is special," Soadat said. "I write in English."

Michelle Kanaar is the co-founder of Borderless Magazine. She's been hitting the road with Soadat on reporting trips around the Midwest.

"She's really good at making people feel comfortable and getting to know their stories, so it's just been great from the start," Kanaar said.

Kanaar says newsrooms should look like the people they cover.

"We need to do a better job of opening the door for people like that, even if they require maybe a little bit more training and mentoring," Kanaar said. "And we're really committed to it, you know, like we're trying to see what other things she can get after us, whatever support she needs."

For now, Soadat is working on a series of profiles to highlight what it's like for various refugees to start from scratch in the U.S.

She recently interviewed someone she admires — Salima Mazari, one of only three female district governors in Afghanistan. She led a fierce resistance against the Taliban last summer.

For a while, Mazari's supporters thought she had been captured.

Now, safely in the U.S, she agreed to tell her escape story to Soadat, but she asked Newsy not to disclose where in the U.S. she now lives.

"I think it is an interesting story," Soadat said. "My passion is journalism. I love journalism. I'm just happy."

Soadat says her success in U.S.-based journalism is bittersweet because her heart is still in Afghanistan. There, the situation for her family, and specifically women, is getting more dire by the day.

Though she is half a word away from home, Soadat wishes to tell women there to keep fighting.