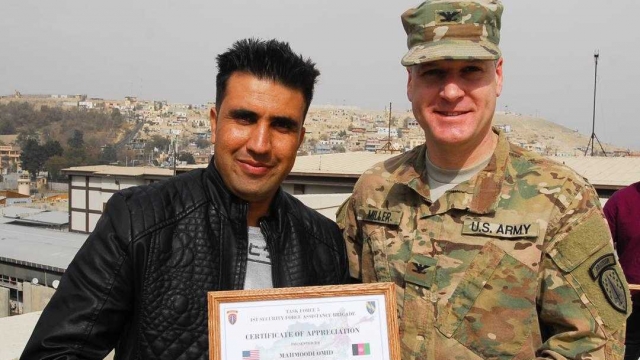 By Ben Schamisso
July 14, 2021
Despite risking their lives for the U.S. military, many interpreters can't get a U.S. visa because they failed a polygraph test once.
SHOW TRANSCRIPT

When Afghan interpreter Ajmal Sediqi worked for the U.S. Army, he was nicknamed “Bob” so the Taliban wouldn’t overhear his real name during combat.

“They called me Bob Marley,” he recalled.

For nearly three years, he fought side-by-side with American and Aghan soldiers at great risk to himself and his family.

“One time we were on mission. We caught some of the Taliban insurgents. They said that we will get free and we will cut your head off,” Sediqi said.

With the Taliban gaining ground, the White House tells Newsy it will start relocating in late July thousands of interpreters and family members waiting for Special Immigration Visas, or SIV.

But it’s unclear what will happen to Afghan allies, like Sediqi, who either don’t meet the narrow criteria for the interpreter visa or who have been repeatedly denied.

“My family, my wife also, they are worried. They say that you work with Americans. So now if they come and they catch you, what would happen?” Sediqi said.

The U.S. Army fired Sediqi after 36 months of service because he failed the same polygraph test he had passed multiple times before during routine security checks.

As a result, the 31-year-old man is now blacklisted. And he’s not the only one.

“They just told me you failed the polygraph test,” said Omid Mahmoodi.

“They sent me a denial letter, added Khan.

In interviews, many Afghans told Newsy about requirements for the SIV visa they failed to meet: from documenting life threats to chasing references from long-departed contractors to passing polygraph tests.

Either way, they say the Taliban are coming for them.

According to the non-profit No One Left Behind, at least 300 Afghan interpreters or family members have been killed by insurgents between 2014 and 2020 — before U.S. troops started leaving the country.

“I received a lot of phone calls from the Taliban. And they told me so soon your brothers would leave Afghanistan and we will come to Kabul and we will find you and we will kill you,” said Mahmoodi who worked as a linguist for the U.S. Army for nearly three years.

“We're essentially willfully sentencing our partners to death and their families alongside with them for polygraph tests. I mean, it just does not match up,” said Afghanistan veteran Chris Franco  who supervised Sediqi a decade ago.

“I mean, shoot, Ajmal did three years with the U.S. armed forces, that's longer than a lot of folks are deployed,” Franco said.

He says Sediqi’s courage and loyalty to U.S. troops in the heat of battle should be the ultimate test.

“These folks were there through thick and thin with us, never harmed us . Some were killed and many traumatized in so many ways and like, to rest all of this on a polygraph?” Sediqi said.