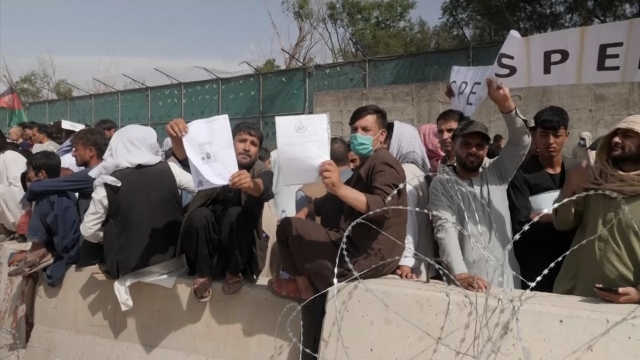 Hours before the deadly explosions near the Kabul airport, at-risk Afghans hoping to flee the country were already facing impossible odds.

"The Taliban, they were beating the woman," former interpreter Jack said. "They just used the violence against each civilians, they didn't ask who had documents, they didn't care."

A few Afghan interpreters shared with Newsy the dreadful situation they faced near the airport gate where the attacks occurred hours later.

Preventing them from getting through were gigantic crowds of people rushing in all directions and Taliban fighters beating them up at various checkpoints.

"They said, 'We won't allow anybody to leave Afghanistan, you have to stay in our own country,'" Jack said.

We're calling this interpreter Jack to protect his identity. That's the nickname U.S. soldiers gave him during combat years ago.

Jack had with him a letter from a U.S. congressman requesting his immediate evacuation — but he never managed to show it to the U.S. soldiers guarding the airport's entrance.

"Everybody was trying to get to the U.S. troops but unfortunately we couldn't make it," he said.

That's despite real-time help he received from U.S. veteran Chris Franco from thousands of miles away. They served together in Afghanistan a decade ago.

"It has been almost two weeks with very little sleep and working as diligently as we can to share whatever information could be helpful for our folks on the ground, for each other, to help coordinate whatever means to evacuate Afghanistan right now," he said.

At 10 p.m. local time on Wednesday, the Taliban forced everyone out of the area where Jack was, near the Abbey gate that serves as one of the airport's main entrances.

That's roughly where both explosions detonated on Thursday.

Fortunately, Jack had gone home by then.

Franco said, "The attacks that have unfolded here in the last handful of hours, obviously underscoring just how dangerous the situation is on the ground, particularly at this gate, which we were being asked to send our Afghan allies to."

In the aftermath of the bombings, Jack says he can't risk going to the airport anymore. He asks why the country he served for three years can't escort him to the airport?

"We just want to hear from Mr. Franco if he can find the best way and good solution to help us," he said.