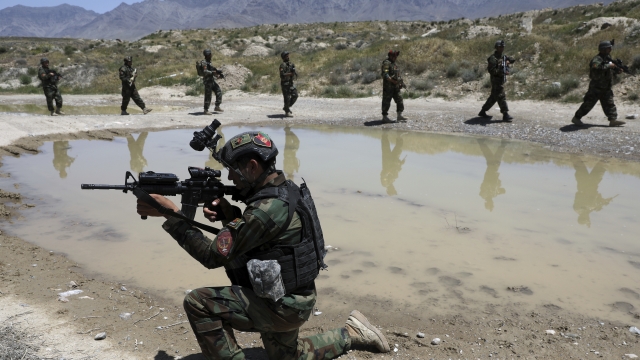 SMS
Afghan Forces Struggle To Keep Territory From Taliban Control
By Lauren Magarino
By Lauren Magarino
May 27, 2021
The Afghan government tells the world it can handle its own, as American troops leave. But that message may be a mirage.
SHOW TRANSCRIPT

“there will be no security vacuum or gap in Afghanistan.”

The Afghan government telling the world-- we can handle our own, as American troops-- leave. But that message… may be a mirage.

Thousands of U.S. And allied NATO troops will be gone by Sept 11. So will American air support.

The biggest question: are Afghan troops able to fight on their own?

Leadership across more than half of Afghan districts is contested… with Taliban forces controlling 22 percent… and the other 24 percent either firmly under Afghan government control or undetermined.

“Today we have quantity, not quality."

Afghanistan’s military is twice as large as it was a generation ago… 300-thousand soldiers now serve. But military analysts say most are uneducated.

And some of those soldiers say… they lack proper equipment. Like boots… corrupt contractors often use shoddy material.

Afghan army veterans like Abdullah Mohammadi… who lost an arm and both legs in combat… feel demoralized.

He says “i don't regret my sacrifices, but i am upset with the Afghan government, especially the Ministry of Defense, they haven't looked after me properly.”

Mohammadi says for the past year, he hasn’t received his promised pension… 200 dollars a month.

Concern… now growing… as Afghan forces desert more posts… and the Taliban are already gaining both ground and political influence.

All that, painting a bleak future for the embattled region.