A Women's Climbing Group In Kabul Details Life Under The Taliban 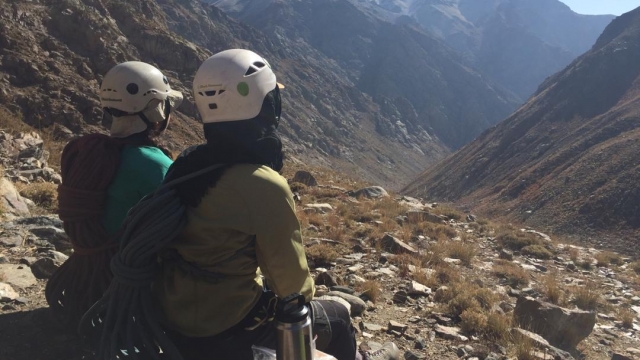 SMS
A Women's Climbing Group In Kabul Details Life Under The Taliban
By Meg Hilling
By Meg Hilling
August 24, 2021
Two weeks ago, Ascend spoke with Newsy as the Taliban were gaining control in Afghanistan. Now the climbing organization details its new reality.
SHOW TRANSCRIPT

"Our mission has utterly changed since I last talked to you," Marina LeGree, founder of Ascend said.

In early August, we shared with you the concerns of female athletes in Afghanistan as the Taliban were battling for control of the country.

"This year, it's more about security. I cannot go to the mountain, I cannot climb, I cannot be in the tent. I missed the climbing groups. And this is not easy to accept," an Afghan instructor with Ascend said.

"They're basically feeling like they're hunted and that’s because they are," LeGree said.

Ascend is an organization that works with young women in Afghanistan to develop leadership skills and confidence through climbing. Since 2014 the organization has been working to develop the physical and mental strength of these girls through exercise, rock climbing, wilderness training and team-building activities. Its founder, Marina LeGree, told Newsy from Italy her team’s primary focus now is keeping their girls safe, be it on the ground or through evacuation.

"We're doing everything we can to get them out. But it's been an incredible exercise in frustration, because our government doesn't seem to have the will to actually protect people," LeGree said. "We have some people out which we're thrilled, and every life counts, and we're just focused on getting to those who aren't safe yet."

For the few that have managed to secure documents to leave Afghanistan, LeGree says their exits have been traumatizing.

"It makes me break down at night when there's a girl who has been at the airport for three nights in a row with her family and has seen a woman killed right next to her and her little sister has blood from a dying person splattered on her. Imagine what that little girl is going to go through for the rest of her life in terms of trauma," LeGree asked.

LeGree says many of the girls who remain have already begun having horrifying encounters with Taliban fighters.

"They're just terrified right now, because the Taliban has commenced house to house searches, looking for people who are affiliated with programs like ours and the government and other things," LeGree said. "We know of some instances already where siblings of team members have been caught wearing the wrong clothes and beaten."

"Our girls are terrified. They also are very fixated on the rumors that are substantiated in some cases, that they are taking girls to be brides. So that's what they fear will happen to them," LeGree said.

LeGree says the Taliban have given Afghans no reason to trust their promises of peace.

"I don't believe it for a minute," LeGree said. "If there's a reason that we don't need to fear, then I would not be letting my people make such desperate decisions and be separated from their families and going into dangerous mobs and all of that."

Despite the uncertainty surrounding each new day, LeGree says Ascend will continue its mission fighting for young women in Afghanistan.

"A Taliban government is obviously not the same to work with as what we've been doing. But it's a human rights issue. And we're not going to walk away from it just because it got harder," LeGree said.

"There are lots of civil society organizations that are doing the same thing. And we're grateful for that. And I think the next phase will be a lot of networking and partnering and figuring out how we can stand by our fellow humans and not walk away after this debacle is over," LeGree said. "I'm calling on people to remember Afghans are people, they're out there, just because the Taliban are in charge now, doesn't mean it's a done deal. There's, there's a lot ahead of us, and we need to stay engaged."