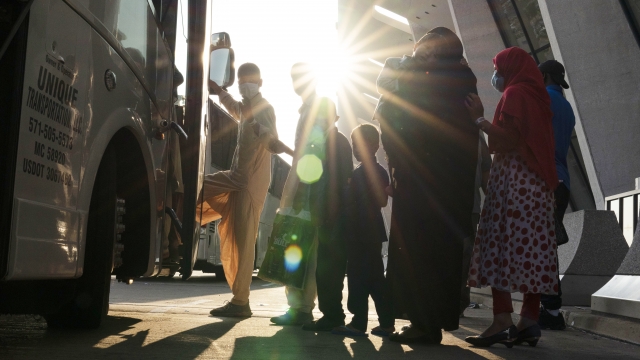 In a federal lawsuit, the Afghan family accuses Joshua and Stephanie Mast of false imprisonment, conspiracy, fraud and assault.

The young Afghan couple raced to the airport in Kabul, clutching their baby girl close amid the chaotic withdrawal of American troops last year.

The baby had been rescued two years earlier from the rubble of a U.S. Special Forces raid that killed her parents and five siblings. After months in a U.S. military hospital, she had gone to live with her cousin and his wife, this newlywed couple. Now, the family was bound for the United States for further medical treatment, with the aid of U.S. Marine Corps attorney Joshua Mast.

When the exhausted Afghans arrived at the airport in Washington D.C. in late August 2021, Mast pulled them out of the international arrivals line and led them to an inspecting officer, according to a lawsuit they filed last month. They were surprised when Mast presented an Afghan passport for the child, the couple said. But it was the last name printed on the document that stopped them cold: Mast.

They didn’t know it, but they would soon lose their baby.

This is a story about how one U.S. Marine became fiercely determined to bring home an Afghan war orphan, and praised it as an act of Christian faith to save her. Letters, emails and documents submitted in federal filings show that he used his status in the U.S. Armed Forces, appealed to high-ranking Trump administration officials and turned to small-town courts to adopt the baby, unbeknownst to the Afghan couple raising her 7,000 miles away.

Last year, the U.S. promised to evacuate all military interpreters, but the country's chaotic exit left most of them behind.

The little girl, now 3 ½ years old, is at the center of a high-stakes tangle of at least four court cases. The Afghan couple, desperate to get her back, has sued Joshua and his wife Stephanie Mast. But the Masts insist they are her legal parents and “acted admirably” to protect her. They’ve asked a federal judge to dismiss the lawsuit.

The ordeal has drawn in the U.S. departments of Defense, Justice and State, which have argued that the attempt to spirit away a citizen of another country could significantly harm military and foreign relations. It has also meant that a child who survived a violent raid, was hospitalized for months and escaped the fall of Afghanistan has had to split her short life between two families, both of which now claim her.

Five days after the Afghans arrived in the U.S., they say Mast – custody papers in hand – took her away.

The Afghan woman collapsed onto the floor and pleaded with the Marine to give her baby back. Her husband said Mast had called him “brother” for months; so he begged him to act like one, with compassion. Instead, the Afghan family claims in court papers, Mast shoved the man and stomped his foot.

That was more than a year ago. The Afghan couple hasn’t seen her since.

“After they took her, our tears never stop,” the woman told The Associated Press. “Right now, we are just dead bodies. Our hearts are broken. We have no plans for a future without her. Food has no taste and sleep gives us no rest.”

The story of the baby unfolds in hundreds of pages of legal filings and documents obtained under the Freedom of Information Act, as well as interviews with those involved, pieced together in an AP investigation.

Women who served in Afghanistan’s security forces are one of the most vulnerable groups in Afghanistan a year after the collapse.

In a federal lawsuit filed in September, the Afghan family accuses the Masts of false imprisonment, conspiracy, fraud and assault. The family has asked the court to shield their identity out of concerns for their relatives back in Afghanistan, and they communicated with AP on the condition of remaining anonymous.

The Masts call the Afghan family’s claims “outrageous, unmerited attacks” on their integrity. They argue in court filings that they have worked “to protect the child from physical, mental or emotional harm.” They say the Afghan couple are “not her lawful parents,” and Mast’s attorney cast doubt on whether the Afghans were even related to the baby.

“Joshua and Stephanie Mast have done nothing but ensure she receives the medical care she requires, at great personal expense and sacrifice, and provide her a loving home,” wrote the Masts’ attorneys.

The baby’s identity has been kept private, listed only as Baby L or Baby Doe. The Afghan couple had given the baby an Afghan name; the Masts gave her an American one.

The American concept of adoption doesn’t even exist in Afghanistan. Under Islamic law, a child’s bloodline cannot be severed and their heritage is sacred. Instead of adoption, a guardianship system called kafala allows Muslims to take in orphans and raise them as family, without relinquishing the child’s name or bloodline.