Afghan Allies To The U.S. Risk Their Lives But Wait Years For A Visa 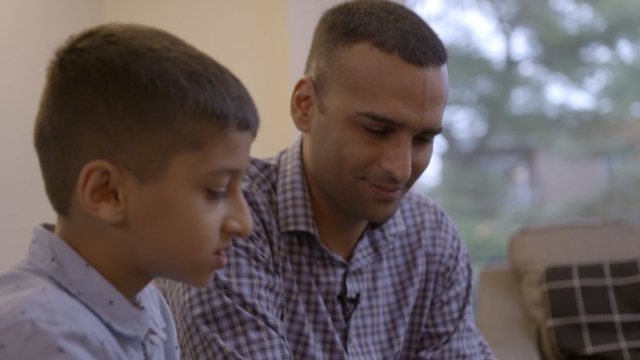 One translator worked for the U.S. for nine years. The Taliban threatened to kill him for it. But it took him three years to get a U.S. visa.

Mansoor Ahmad Mansoor is originally from a small city in Afghanistan called Jalalabad, a part of the country known as "evergreen." He now lives near the nation's capital, Washington, D.C., with his wife, Aisha, and three kids. He worked for American forces during what he calls the "dark times" in his country.

Because he worked with U.S. forces, Mansoor faced death threats from the Taliban. He was granted a special visa to move to the United States. But there are thousands more like him.

"I was like the cultural adviser for the U.S. army for a few years, helping with culture society language assistance," he told Newsy. "And then I started working with USAID. The USAID office is in the U.S. Embassy in Kabul, and because of my daily commute, people actually kind of noticed."

"I was getting multiple phone calls, from the Taliban, clearly."

Mansoor heard different messages from them: "The first one I used to get was, 'You are the American spy.'"

Mansoor tried to survive, all the while continuing to work with the United States. He repeatedly changed his phone number. He moved apartments every six to eight months. Nothing worked.

"One day I received an email from them, to my official email, a long letter. The message was: 'This is going to be the last warning we give to you. You have a deadline of the end of Ramadan,'" Mansoor said. "'If you don't quit your job, we are going to cut your head from your body and give it in Eid as a gift to your mom.' And that was a super serious message for me."

Mansoor applied for a Special Immigrant Visa, or SIV. The  program was established more than a decade ago, initially to protect Iraqis who worked for the United States. It was later expanded in 2009 to cover Afghans. Mansoor's case was considered urgent. Still, it took him three years to get approved for an SIV.

"Every day I felt like it was going to be the last day of my life."

Many SIV applicants are like Mansoor. They wait years, not months, for a decision, despite a mandate from Congress to decide within nine months.

Mansoor said: "I had to go to that website every single day to make sure where the hell my case was. One day you see a date change, it's like, 'Oh my gosh! Someone actually picked your file!'"

According to the State Department's most recent report released in July, applicants wait, on average, one and a half years for a final decision. Advocates say the long wait can be dangerous.

Adam Bates, the policy counsel for the International Refugee Assistance Project, or IRAP, told Newsy: "This isn't just a threat to their lives. This isn't just that ethical and strategic responsibility. At this point, the administration is breaking the law."

IRAP is suing the State Department over processing times. They were a problem under President Obama, too. IRAP filed a lawsuit for a similar reason in 2015.

But Bates says it's gotten worse since then. In its first fiscal year, the Trump administration issued half as many SIVs than under the Obama administration. In President Obama's last year, the government issued 4,677 SIVs to Iraqi and Afghan nationals. That fell to 1,801 in the 2018 fiscal year.

"These are people operating in trusted and sensitive capacities for the U.S. government in a war zone, so these people have already been vetted," Bates said.

Newsy asked the State Department about Bates' concerns. An official said, "We take these threats very seriously, and we are committed to providing efficient and secure SIV processing while maintaining national security as our highest priority."

As a congressman, Vice President Mike Pence strongly defended the program in 2007. In a House Foreign Affairs hearing, he said, "Helping those who have helped us is a moral obligation of the American people."

Bates warned: "These are not the last conflicts that the U.S. is going to be in. So in terms of maintaining a reputation for upholding our end of these deals and helping the people who help us, it's not just Afghanistan and Iraq. It's important for every conflict the U.S. is in."

Mansoor has settled into his new life in Northern Virginia with his family and now works with a foundation that promotes free and fair elections around the world.

"I'm really thankful for all those soldiers sacrificing their lives, and I'm thankful for their families sending those brave stars to Afghanistan, helping Afghans to have democracy and a better life. And I do have lots of good memories with them, and I'm really proud of that."

As of its latest report, the State Department says there are more than 9,000 SIV applications pending.

Austin Landis produces stories for Newsy's cable channel. Before joining the D.C. bureau, she reported locally while getting her journalism degree from the University of Florida. Despite some nostalgia for her native Sunshine State, she's loved making the capital her home — especially since it means never-ending museum visits, live music and connecting with people from all over the world. When on a break from AP news alerts, find her planning a trip to South America, buying concert tickets or slowly working her way through the stacks on her bookshelf. @_AustinLandis