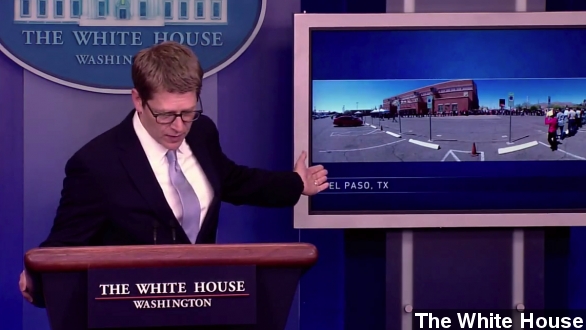 ​Some technical glitches, along with a surge of newly insured Americans, marked the final day of open enrollment on HealthCare.gov.

​USA Today is reporting the administration was on track to reach its target of 7 million Americans enrolled in insurance through the Affordable Care Act by midnight Monday, according to an unnamed government official.

White House Press Secretary Jay Carney admitted he didn't have any concrete numbers yet, but at a press conference he estimated, "More than 6 million people have signed up, a remarkable statement, given where we started back in October." (Via The White House)

The Congressional Budget Office originally set a goal of 7 million sign-ups, which was then scaled back to 6 million after the disastrous launch of the program's website. But it might be weeks before the official tally is in.

And when the numbers are out, HealthCare.gov enters its next challenge: the quality of the program itself.

ABC notes, despite enrollment by the millions, Obamacare's success hinges on the type of people who make up that 7 million.

The White House has said it needed at least 38 percent of the participants to be young people under the age of 35 — that's to offset the cost of older, less healthy Americans.

And while the demographic of the applicants is unclear, the looming deadline seemed to prompt even more Americans to sign up. Bloomberg reports on Monday, the federal exchange website received an unprecedented amount of traffic. It recorded 4.8 million visits — the most in a single day. Its call center also received more than 2 million calls.

Those unprecedented numbers came even after the website was temporarily unavailable early Monday.

CBS reports an unexpected software bug crashed the site and made it unusable for new enrollees for a few hours. The bug was not related to the large volume of users.

Still, some Republicans say the administration hasn't been transparent enough about the enrollment numbers. GOP Sen. John Barrasso criticized the White House for "cooking the books" on their final count.

"What's the kind of insurance will those people actually have? Will people be able to keep the doctor that they want? And we know some of the best cancer hospitals want very little to do with with people who buy this insurance." (Via Fox News)

A small portion of users are somewhat exempt from the March 31 deadline for now. Those who have started the application process Monday but could not finish by midnight will have one more week to complete their applications for coverage.