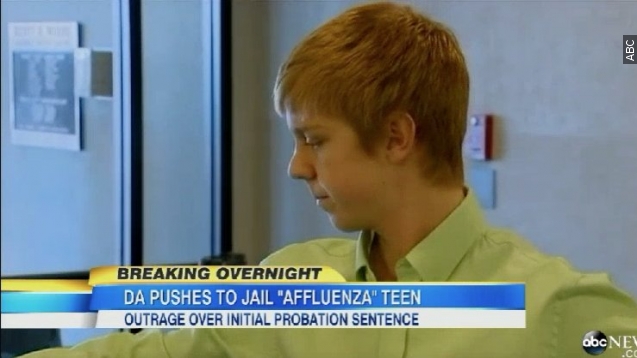 SMS
'Affluenza Teen' Ethan Couch Missing, Says Probation Officer
By Ryan Biek
By Ryan Biek
December 16, 2015
Ethan Couch was found guilty of killing four people while driving drunk in 2013. He was given 10 years' probation, and he may have violated the terms.
SHOW TRANSCRIPT

Texas authorities are searching for the teenager who was found guilty of killing four people while driving drunk back in 2013, then claimed "affluenza" as part of his defense.

According to a report from The Dallas Morning News Tuesday, Ethan Couch's probation officer had been unable to contact him and his mother for several days.

Couch's sentence of 10 years' probation without time in jail or a juvenile detention facility instantly became controversial. (Video via ABC)

So did his defense team's argument that the teen suffered from "affluenza," a condition in which Couch was unable to control his behavior because of the extravagant, consequence-free lifestyle his wealth enabled. (Video via KXAS)

At the time of the trial, the condition was not recognized by psychology's official diagnostic manual.

A video posted to Twitter this month allegedly shows Couch at a party with alcohol. (Video via KTVT)

"The key to the whole thing is, did he violate a term or condition of his probation?" an attorney unaffiliated with the case told KTVT.

Those terms have not been disclosed because Couch was a minor at the time of his trial. A judge has ordered him detained, and he could face 10 years in prison if found guilty of violating his probation.