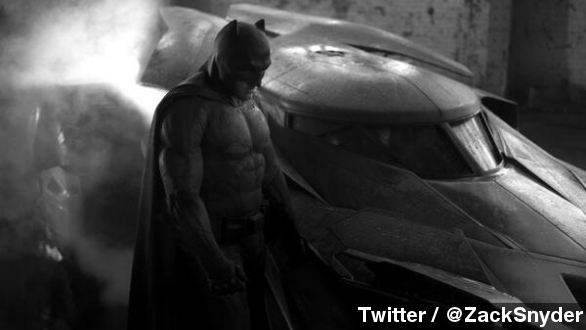 Details about the upcoming, yet-untitled Batman vs. Superman movie have been scarce lately. But this week, director Zach Snyder dropped just enough visual material on us to keep the frenzy going until the next big reveal.

We'll bypass all the "Holy that's-not-what-we-expected, Batman!" quips and go straight into the visuals. Snyder tweeted a first look at Ben Affleck as The Dark Knight Tuesday. While the image is dark and shadowy, there's still plenty for writers to dissect.

For starters, the batsuit will not have nipples. Sorry, George Clooney and Val Kilmer. (Via Gawker)

One overwhelming description of Affleck's batsuit is "Miller-esque."

That's because some writers feel this version of the batsuit takes inspiration from Frank Miller, writer of several Batman comic books and graphic novels. (Via Cinema Blend, The Escapist)

A writer for Cinema Blend says Snyder's version of the suit comes "complete with a very broad chest, a large bat symbol, and smaller bat-ears," much like Miller's.

A closer glance at the suit reveals, as one MTV writer puts it, a "sinewy" and roughed-up look because, you know, Batman's been through some things. He adds Affleck looks like a "bulldog."

As another writer puts it, maybe he just stole Bane's arms. Who knows? (Via Entertainment Weekly)

The photo of Snyder's batsuit comes just a day after the director teased a picture of a tarp-covered batmobile. With Tuesday's reveal, we see that Affleck's mode of transportation will also a be a hybrid, much like his suit. A writer for CNET says, "It kind of looks like a cross between Bale's Tumbler Batmobile, a stealth fighter, and a complicated piece of origami." (Via Twitter / @ZackSnyder)

Surprisingly absent from Tuesday's discussion of over-analytical observations was the same kind of fuss kicked up after it was announced Affleck would play Bruce Wayne. I mean, there were Change.org petitions!

So, have people gotten over the casting or are the visuals promising enough to give Batman fans/Affleck haters temporary amnesia?

Maybe it's something different altogether. A writer for The Daily Beast believes Batman looks truly sad in this photo, saying the caped crusader is actually "sulking" near his new car.

Then again, how would you feel if you had to fight a guy who wore a burlap sack and sprayed people with hallucinogenic toxins? Yeah, pretty depressing. (Via Warner Bros. / "Batman Begins")

Looks like Affleck's batsuit and and batmobile have passed muster ... for now. The upcoming film is slated to hit theaters May 6, 2016.