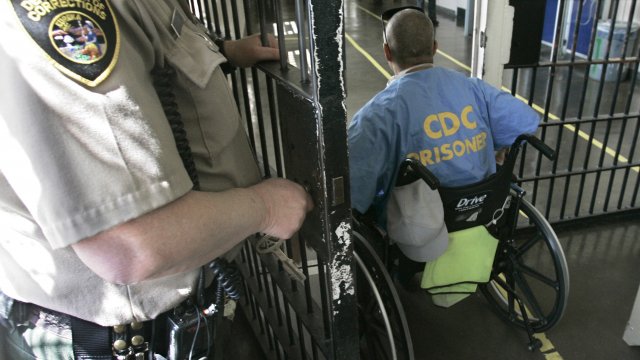 SMS
Advocates Want Older Inmates Released Before Coronavirus Hits Prisons
By Jamal Andress
By Jamal Andress
March 19, 2020
U.S. prisoners over the age of 55 have increased by 400% since 1993, and they're the most at risk of being killed by the coronavirus.
SHOW TRANSCRIPT

As the coronavirus outbreak spreads across the country, criminal justice advocates are calling for the release of elderly inmates who are most at risk of being killed by the virus.

Jose Hamza Saldana was released from New York state prison in January of 2018 after serving 38 years behind bars. As director of the Releasing Aging People in Prison campaign, or RAPP, Saldana worries this disease could ravage an already vulnerable community.

In New York and several other states, correctional facilities are beginning to see confirmed cases of the coronavirus. And experts believe if this virus ultimately makes it into prisons and jails, it's going to spread very quickly.

Amanda Klonsky, a former Harvard resident and prison educator, has worked within the prison and jail system for 15 years.

Klonsky: "Most people in jails and prisons have some kind of underlying health problem. Prisons themselves can make you sick. ... We know that people who have served long sentences in prison, … those people have had a recidivism rate post-release of close to zero. People get out, they don't commit additional crimes. They're not posing any threat to society to our safety, but they are in terrible danger right now."

The New York City Correction Officers' Benevolent Association, the largest municipal jail union in the nation, has called the proposal to release inmates in reaction to the coronavirus outbreak "irresponsible" and a risk to public safety.

According to the ACLU, the U.S. national arrest rate drops by more than half between the ages of 20 and 40, and by the time you make it to 65 it sits just above 0%.

This concept also holds for people who have already served time in prison. A 2005 study shows amongst former felons who were re-arrested, less than 5% were 60 years old or older.

With confirmed cases in New York state prison already, Saldana is hoping Gov. Andrew Cuomo will grant clemency to elderly prisoners in the state. He says he has friends still locked up who may not survive if COVID-19 spreads throughout the prison.

"I have one brother, man, he's 73. He has cancer. Another one is dealing with the hepatitis virus, ... and now we're faced with a terrible virus that is sure to take them out."