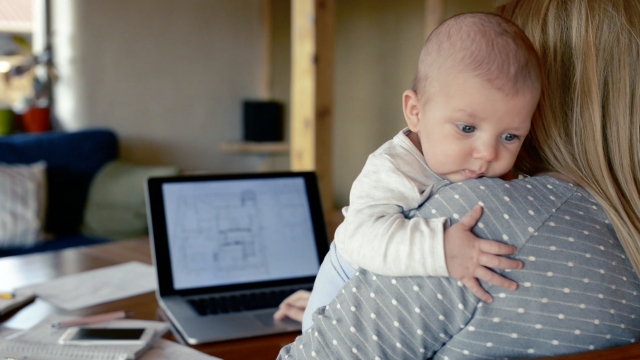 As the push for paid family leave spreads, researchers dig deep into the overall success of the policies.

“That’s what you want to watch, right? This? I’m gonna wreck it.”

“I knew that I was going to be a working mom. It was not in my plans to ever be a stay-at-home-mom.”

Tyni Birdsong says she believes her employer thought otherwise. Something she learned after returning from paid maternity leave.

Birdsong: “There was an opportunity that came about a promotional opportunity, I knew I was the perfect person for the job, everybody kind of knew it as well. And I didn’t get it.

Strong: Why do you believe that is?

Birdsong: I found out much later, many months later. The hiring manager thought that I was going to quit because I was a new mom. And she didn’t want to risk hiring me for this promotional opportunity and I leave.”

Advocates for paid leave say it helps fix the gender pay gap.But as a growing number of states and the federal government push to expand the policy experts say the value of certain programs depend on what's viewed as beneficial -- time with a new baby or preventing the loss of wages.

“Researchers discovered new moms who took advantage of California’s 2004 Paid Family Leave Act saw their annual wages fall by 8% in the 10 years after giving birth. Overall They earned about 25,000 dollars less than their counterparts.”

The study, which is the most comprehensive in the US, found some mothers became flexible and found ways to make money outside the workplace, just not as much money as a typical 9-5.

Others may have fallen victim to discrimination, similar to Birdsong’s claim, although researchers believe that’s not the driving force behind the wage impact.

“There is some notion that when you have access to paid leave if you’re staying home longer than you might otherwise, in these really critical sort of first couple of months with your child, that this might change your preferences.”

Paid Leave advocates say no one study could represent the full extent of discrimination and suggest there’s a simple solution to cutting down on any hint of so-called mommy tracking...level the playing field between working moms and dads.

“If both of those individuals are offered paid leave and both are encouraged and this is important, expected to take it and take the full of amount, then mommy tracking, sort of pigeonholing new moms into a particular category of people who are going to be out of work and come back need to get caught up, it’s gone.”

Researchers agree policies need to be well-crafted and hope one study doesn’t cause politicians to dismiss the overall benefits of paid leave.

“Moms are better off, kids are better off, the welfare and well-being of the mother’s mental health and health outcomes and children is better, as a result, to access to paid family leave.”

Birdsong says she stayed on the job and was promoted, eventually.

Strong: We talked about the negative side and that is the, that you feel you missed out on an opportunity. But were there benefits for taking that leave?

Birdsong: Absolutely, being present. Being there with my children, that bonding time is so crucial.”