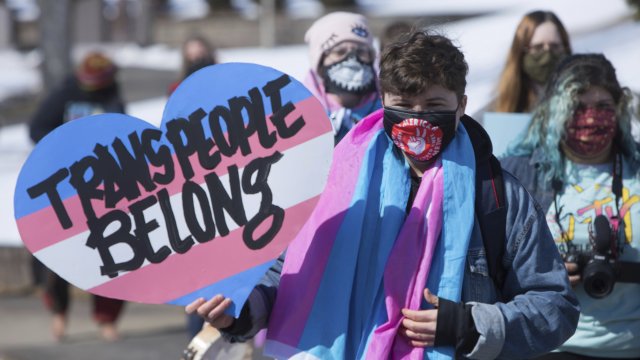 SMS
Advocates Worry About The Effects Of State Laws Targeting LGBTQ Youth
By Newsy Staff
By Newsy Staff
March 14, 2022
Trans kids have been put under the microscope by state legislatures, with some proposing laws that restrict their identity and health care.

It’s hard to be a kid. You’re navigating a new world, trying to understand it, learning about other people and yourself, going through puberty and years of awkwardness that sometimes stretches into adulthood.

And LGBTQ+ kids can sometimes have it even harder. Many have to balance all that while worrying about being bullied for who they are and worrying if their parents will still love them the same way if they come out.

It’s important to distinguish sex, which is determined by your biology, from gender, which is based on societal perceptions. Being transgender means that your gender identity differs from your biological sex.

There’s a growing awareness of transgender and nonbinary identities, but discrimination is still rampant in parts of life as complicated as health care to things as simple as which bathroom a person can use.

It takes a toll on mental health, according to Dr. Jack Drescher, a clinical professor of psychiatry at Columbia University and an expert on LGBTQ+ mental health issues.

"There are lots of places where kids have to hide their identities from those around them that comes at a cost," Dr. Drescher said. "Sometimes it may come at the cost of their mental health in terms of anxiety, sometimes depression. There are some statistics that indicate thinking about suicide is more common, you know, among particularly transgender kids."

A survey released last year by the LGBTQ+ suicide prevention effort the Trevor Project found that more than half of all transgender and nonbinary young people seriously contemplated suicide in 2020.

And in the last couple of years, it’s those kids who have been put under a microscope by state legislatures across the country. Republicans have introduced a spate of laws focused on transgender youth, proposing laws restricting their ability to play sports, blocking them from changing their birth certificates and denying them from accessing health care that aligns with their gender identity.

Advocates have pushed these laws in an effort to give parents more say over decisions relating to their children as minors. They’ve come in conjunction with other efforts, like the push for parents to have more of a say in what their kids learn at school and bans on certain books or discussion topics. Many of those, like critical race theory, relate to race, gender or social justice issues.

But when we talk about gender-affirming care for minors, we’re generally not talking about surgeries.

Gender-affirming care can include everything from taking hormones, to getting counseling or therapy to deal with life’s struggles, to even speech therapy if you want your voice to align with your gender.

In Arkansas, Republican legislators passed a bill that banned doctors from administering or even referring transgender youth for treatments that would affirm their gender. That bill passed despite a veto from the state’s Republican Gov. Asa Hutchinson, who argued the bill was government overreach.

The law is currently not in effect, as court battles are still ongoing. The American Civil Liberties Union is suing both Arkansas and Texas for their actions. And as the ACLU’s deputy director Rose Saxe told us, their challenges are rooted in the civil rights of the affected kids and their parents.

"These bills, they pose a range of problems, but all of them by targeting trans people for who they are, that is, of course, a constitutional problem," Saxe said. "The government is not allowed to treat people differently because of who they are without a sufficient reason and where it targets people based on their gender and their gender identity and their gender expression. The government should not be denying people's fundamental right to access care and interfering with parents' rights to make decisions about their children's best interest."

Medically, these treatments are well-researched. Gender-affirming care has the support of the American Medical Association and American Academy of Pediatrics.

Both have condemned laws that block access to gender-affirming care, with the AMA calling the bans “a dangerous intrusion into the practice of medicine” and the American Academy of Pediatrics noting that gender-affirming care can help address mental health and thoughts of suicide.

So according to those medical groups, this treatment could in some cases actually be the difference between life and death.

Now, the lawmakers pushing for these laws that restrict access to gender-affirming care argue that children really aren’t capable of making decisions around this topic.

Arkansas and Tennessee are the two states that signed bills governing trans health care issues into law, and bills in Alabama and Idaho would make prescribing hormone treatments a felony punishable by up to 10 years in Alabama or life in prison in Idaho. Those bills are currently moving through the legislature.

In Idaho, supporters of the law are focusing on banning the possibility of surgeries for minors but have extended their proposed ban to more reversible treatments like puberty blockers and hormone treatments.

Idaho Republican state Rep. Bruce Skaug, sponsor of the Idaho bill, defended the ban to a state House committee, saying he had concerns about the treatments and potential side effects.

“If we do not allow minors to get a tattoo, drink alcohol, smoke cigarettes, why would you allow them to go through these physical mutilations because of their feelings at the time?" Rep. Skaug said.

As a reminder, doctors generally don’t recommend surgeries for transgender youth — instead encouraging the other, more reversible treatments that this bill also bans.

Nevertheless, these laws have become pretty widespread, with 21 states introducing legislation that would limit trans health care. Bans on trans youth playing in sports that conform with their gender have also taken off, with 31 states introducing bills, and at least 11 have enacted them into law.

Many of these laws don’t even use the word “transgender," and that’s consistent with both moral and legal arguments of those crafting these laws, according to Scott McCoy, an attorney with the civil rights legal nonprofit Southern Poverty Law Center.

"I think they're the reason why these bills oftentimes don't single out transgender individuals by using the classification of transgender is first," McCoy said. "The proponents of these bills don't even believe that transgender is a thing, right? The other reason why is legally, if you're singling out a particular class of individuals by name, it's just easier to challenge that as a targeting of a particular class for disparate treatment."

In Florida, legislators passed a ban on trans female athletes competing in women’s sports last year. And this year, they’re moving ahead with a pair of pieces of legislation, one officially named the Stop WOKE Act and another dubbed the “Don’t Say Gay” bill by opponents, that would limit conversations on gender and sexual identities for young children and could make it harder for LGBTQ+ youth to keep their identities protected from their parents if they’re not ready to come out.

Opponents worry that could prevent LGBTQ+ students from seeking out teachers as a resource.

“Had teachers that stood up for me or could help me better understand what I clearly did not understand, I would not have had to hide myself or lie about who I am," Florida resident Salvatore Vieira said. "You say these discussions should only happen between a parent and a child. Not all children are the same. I didn’t run home to ask my parents what these things were. I was scared and ashamed.”