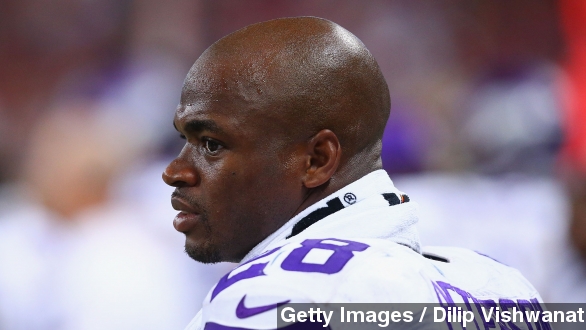 By Nathan Giannini
September 12, 2014
The Minnesota Vikings running back will reportedly have to turn himself into police after facing charges of reckless or negligent injury to a child.
SHOW TRANSCRIPT

Minnesota Vikings star Adrian Peterson has reportedly been indicted in Texas for reckless or negligent injury to a child.

Mark Berman, the sports director at Houston Fox-affiliate KRIV, was the first to report the news. The station reportedly attempted to contact Peterson’s lawyer, Rusty Hardin, but he declined to comment.

NFL Network’s Ian Rapoport added to that report, saying the indictment “stems from the disciplining of a son with a switch” and that the investigation has been going on for some time. Peterson even reportedly testified in front of a grand jury.

And TMZ confirmed Child Protective Services was looking into a case involving Peterson and an 4-year-old boy.

Last year a 2-year-old son of Peterson’s, whom he did not live with or have any involvement with, was beaten to death by the boyfriend of the boy’s mother.

This news of Peterson’s alleged indictment obviously comes at a difficult time for the league, which is under fire for its handling of Ravens running back Ray Rice’s domestic violence case. Rice was initially suspended two games, but was later suspended indefinitely after TMZ released video of the incident.

Fox Sports reporter Jay Glazer says now Peterson “will have to turn himself in” to police custody, leaving his status for this weekend’s game up in the air.

Peterson didn’t practice with the Vikings yesterday, according to the Minneapolis Star Tribune, which also reports the running back did speak to reporters in his regular news conference.