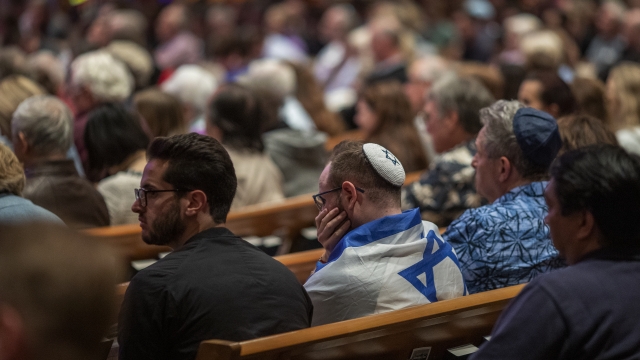 The Anti-Defamation League has released new data on anti-Semitic attacks in the U.S. It says at least 12 white supremacists have been arrested for "alleged roles in terrorist plots, attacks or threats against the Jewish community" since a deadly synagogue shooting last year.

According to the ADL's Center on Extremism, Jewish institutions' properties have been targeted at least 50 times since Oct. 27, 2018, when a gunman killed 11 people at Pittsburgh's Tree of Life synagogue.  That includes 12 acts of vandalism using white supremacist symbols and 35 distributions of white supremacist propaganda.The civil rights group says many of people arrested cited, and even seemed to "mimic," previous white supremacist attacks.

The ADL believes many of these people were "inspired" by other acts of white supremacy, like the Tree of Life shooting. Four days after that attack, anti-Semitic slurs showed up on a California synagogue, and a New York synagogue was vandalized with references to Hitler. On the attack's six-month anniversary, which also fell on the last day of Passover, a gunman killed one person and left others injured at a synagogue in California.

The ADL report provides details on all of the arrests made. It also notes three other people were arrested for allegedly "targeting Jews," two of whom it says were motivated by "Islamist extremist ideology."

The report also includes 30 other accounts of Jewish institutions being targeted. These were acts of arson, vandalism and propaganda distribution, but the ADL says they were carried out by people of "unknown ideology," not necessarily white supremacists.

In at least three cases, the ADL says it gave authorities critical information leading directly to investigations and arrests. The group's CEO, Jonathan Greenblatt, said, "This is why we do what we do."

He said: "We cannot and will not rest easy knowing the threat posed by white supremacists and other extremists against the Jewish community is clear and present. We are proud of our collaborative efforts with law enforcement to prevent such tragedies from taking place and ensuring would-be perpetrators of these heinous crimes are brought to justice."

Correction: A previous version of this story incorrectly identified an image of Charlie Chaplin as Adolf Hitler. This story has been updated.