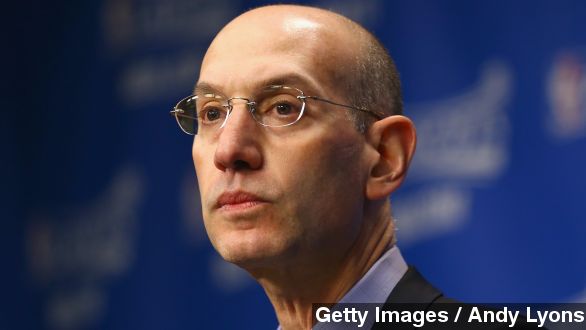 Much of the spotlight at the NBA All-Star Game festivities Saturday was rightfully on basketball's finest athletes in the annual dunk contest.

But, NBA Commissioner Adam Silver also crept into the headlines, and it's fair to say he's got a lot on his plate. (Video via BBC)

At a press conference Saturday, Silver unveiled part of his vision for the league. (Video via ESPN)

For starters, he wants to give players more rest time (by limiting the number of back-to-back games and shortening the pre-season, for example) — an issue brought to the forefront by new NBA Players Association Vice President Lebron James.

"We hear everyone loud and clearly ... There's nothing more important than the health and welfare of our players," Silver said.

Silver also wants to shake up the draft lottery system, so teams won't have as much incentive to lose on purpose to get higher picks.

The NBA pushed for a reform on a draft lottery before this season got underway, but the vote fell short of the two-thirds majority needed to pass it.

"I am concerned about the perception. ... What I see as the increased pressure actually on general managers and even owners in this league to underperform. I mean, that's what's new," Silver said.

The commissioner also wants to make a few tweaks to post-season play — possibly where the 16 best teams make the playoffs irrespective of conference.

These three issues are just a small sample of what Silver's looking to tackle in his second year in office as the NBA continues to thrive on the business front.

The league recently inked a $24 billion broadcasting and media deal with ESPN and TNT spread out over nine seasons — which starts in 2016.

That, of course, is a whole lot of revenue. But Silver and the NBA will need to figure out how to balance the distribution of money to players and owners fairly — something USA Today says the two are odds about.

Plus, as Bleacher Report points out, the revenue hike also frees up a bunch of salary cap space. Or as the outlet puts it borrowing a sentiment from some ever-so-nostalgic rap lyrics: "more money, more problems."

"Team owners hate the idea of a $24 million, one-year leap. It’s unprecedented. It’s unsettling. It could mean all 30 teams will have cap room simultaneously. The market will be flooded with spending money."

Among other issues, Silver also wants to bump up the league's minimum age for players from 19 to 20.

And last year, in a New York Times op-ed piece, he spoke out about his desire to allow sports betting.