Next Step For Sterling: Owners Tasked With Voting Him Out 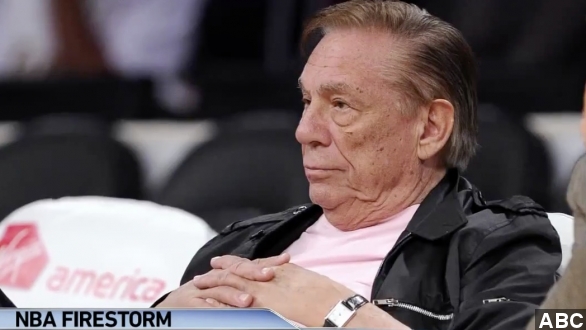 ​After days of speculation, NBA Commissioner Adam Silver handed down his punishment Tuesday for racist remarks made by Los Angeles Clippers owner Donald Sterling. And it was a big one.

“I am banning Mr. Sterling for life from any association with the Clippers organization or the NBA. ”

Sterling will be only the fourteenth person in NBA history to be permanently banned from the league and the only person banned for racist comments. Sterling will also be fined $2.5 million, the maximum fine possible. (Via Fox News)

Despite Silver’s ban, Sterling is technically still the owner of the Clippers pending a vote from the rest of the owners in the league.

“I will urge the Board of Governors to exercise its authority to force a sale of the team and I will do everything in my power to insure that that happens.” (Via MSNBC)

Sterling had been in the spotlight since last week, when TMZ published a recording purportedly of Sterling making racist comments and asking his girlfriend, V. Stiviano, to not bring black people to Clippers games.

Since the initial bombshell, outrage has run rampant — including responses from President Obama:

“When ignorant folks want to advertise their ignorance, you don’t really have to do anything. You just let them talk.” (Via CNN)

Lebron James: “There’s no room for that in our game.” (Via ESPN)

Magic Johnson: “He shouldn’t own a team anymore.”

And Reverend Al Sharpton, among others. “You cannot have someone own an NBA team in this country and have these kind of attitudes.” (Via NBC)

The Clippers team itself made feelings known through a silent protest Saturday, collectively dropping their warmups at half court and going through warm-up drills wearing Clippers shirts inside out. (Via Twitter / @ArashMarkazi)

A move the Miami Heat mirrored with a similar protest Monday. (Via Twitter / @Rachel__Nichols)

Perhaps the biggest blow to Sterling, however, has come from advertisers.

As the Los Angeles Times reports, as of Monday, 15 sponsors, including the likes of Virgin America, Mercedes-Benz, and Sprint had suspended or terminated their sponsorship of the team.

Two other companies that dropped their sponsorship were State Farm and Kia, which currently employ Clippers Chris Paul and Blake Griffin, respectively. Both companies are expected to continue working with Paul and Griffin despite having pulled sponsorship from the Clippers.

Sterling initially bought the Clippers for $12.5 million in 1981, before moving them to LA three years later. The team struggled through years of futility before finding some success after the acquisitions of Paul, Griffin and coach Doc Rivers. (Via ABC)

And pointing to that history, former Lakers great Kareem Abdul-Jabbar wonders why it took the public so long to notice Sterling’s behavior. (Via Flickr / U.S. Department of State)

In a piece for Time he writes, “Really? All this other stuff … has been going on for years and this ridiculous conversation with his girlfriend is what puts you over the edge? That’s the smoking gun?”

Commissioner Silver says when the decision was made to ban Sterling, the owner’s past was not considered. However, when the owners vote on whether to force Sterling out of ownership, his history will reportedly be a factor.