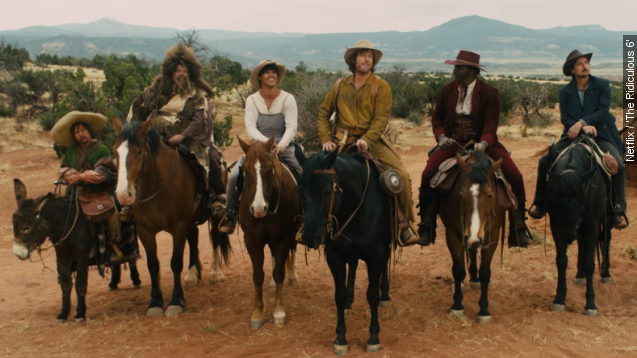 SMS
Adam Sandler's 'Ridiculous 6' Somehow Gallups Into Netflix History
By Cody LaGrow
By Cody LaGrow
January 7, 2016
Despite its terrible reviews, "The Ridiculous 6" is said to be the "most-watched" movie in the streaming giant's history.
SHOW TRANSCRIPT

"The Ridiculous 6" is robbing views from other options on Netflix.

The company announced this week that the knee-slapping Western, fronted by Adam Sandler and friends, is riding off into the streaming sunset, squashing records as the most-watched movie held by any previous opening on Netflix. That includes Netflix originals and licensed movie titles.

The streaming giant's chief content officer told The Verge: "It's been the most-watched movie in the history of Netflix. It's also enjoyed a spot at #1 in every territory we operate in, and in many of them it's still #1."

"You guys play brothers, which is funny just to start with, but you're all half-brothers?" Jimmy Kimmel asked Adam Sandler.

But the funniest part isn't the movie. It's how poorly it's being received. "The Ridiculous 6" has a whopping zero percent rating on Rotten Tomatoes and is described by a critic as "a two-hours-too-long cesspool of gross-out gags and casual bigotry."

Since the reviews of this Western have gone way south, people have questions about what the label "most-watched" means. Most-watched all the way through? Most-watched in the first 10 minutes? Most-watched when desperate at home over the holidays? We just don't know.

It's an uncommon look into a company that rarely shares its viewership data, perhaps because when it does, we the people are more confused than Taylor Lautner's character in "The Ridiculous 6."